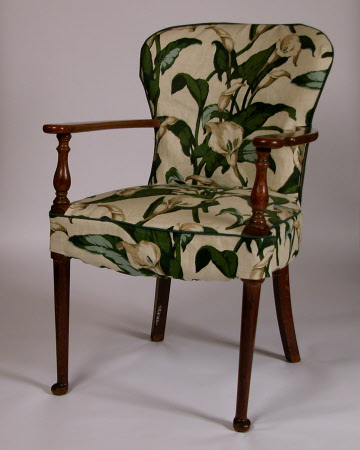 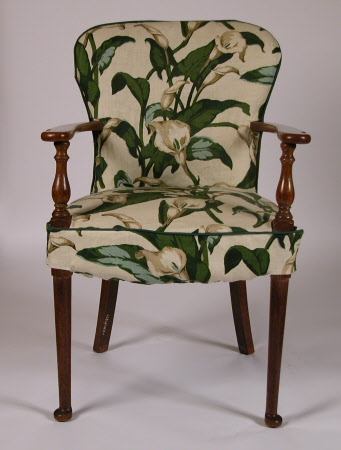 An oak armchair, one of a set of twelve, English, circa 1920s, possibly retailed by Heal's, with a shaped and cushioned seat back joined by a pair of curved armrests, on baluster-form turned supports, the stuffed seat on tapering cylindrical front legs terminating in club feet and square-section splayed rear legs, re-upholstered with glazed cotton chintz patterned with flowers, leaves and musical instruments on a white ground, with later loose covers (circa 2004) in cotton patterned with lilies and leaves on a white ground, with green piping. A memo from Winston Churchill to his wife Clementine, circa July 1922, outlines his opinion on the ideal dining chair and it is possible that these chairs were designed from those specifications. He wrote, 'The Dining Room chair has certain very marked requisites. First, it should be comfortable and give support to the body when sitting up straight; it should certainly have arms, which are an enormous comfort which sitting at meals. Second, it should be compact. One does not want the Dining Room chair spreading itself, or its legs, or its arms, as if it were a plant, but an essentially upright structure with the arms and the back almost perpendicularly over the legs. This enables the chairs to be put close together if need be, which is often more sociable, while at the same time the arms present undue crowding and elbowing.' - WSC memo, n.d. Churchill papers I/I57 The chairs are thought to have been retailed by London furniture maker Heal's and possibly designed by Sir Ambrose Heal who joined the family business in 1893. A 1927 photograph of the dining room shows the chairs with their original loose seat covers which were re-produced (circa 2004) as part of a textile replacement policy to maintain the appearance of the house to its heyday. The seat cover fabric was re-produced by Warners who manufactured the original design, known as 'Arum Lily', in 1925. The chairs were originally thought to have been upholstered with brown and white rep, the later glazed chintz (beneath the loose covers) was chosen by Lady Churchill on the house's opening in the 1960s.