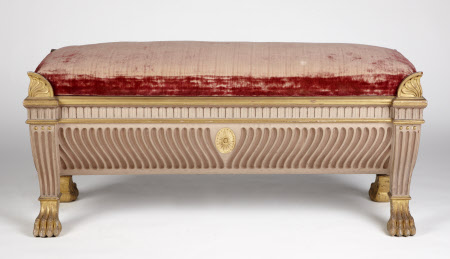 A George the III seat, made by John Linnell to a design by Robert Adam, carved with fluting and foliage, angles carved with honeysuckle ornament and the feet with lions claws, the whole painted pink and partly gilt, the ends decorated with coats-of-arms, fitted with loose crimson cushions. Made for the Saloon in c.1788.

One of a set of twelve painted and parcel gilt deal hall benches, made and supplied by John Linnell (London 1729-1796) and probably designed by Robert Adam (London 1728–1792). The set was commissioned for the Great Hall at Kedleston by Nathaniel Curzon, 1st Baron Scarsdale, circa 1775. Each bench of sarcophagus form with loose rectangular padded satin upholstered seats held at the corners by anthemion brackets and with a stylized leaf carved frieze below. The barreled body with waved fluting centred by a paterae and held by fluted legs with lion's paw feet. The sides painted with the Curzon coat of arms within a guilloche frame and laurel swag.

See: Hayward, Helena & Kirkham, Pat ' William and John Linnell, eighteenth century London furniture makers' for further discussion and extensive research on the Kedleston furniture from the Linnell workshops. They write that the benches were purchased for the Great Hall. This magnificent room, originating in Mathew Brettingham's (1699-1769) plan, worked upon by James Paine (1717–1789) and enlarged in Adam's revised designs, was finally completed by the addition of stucco decoration on the ceilings in the late 1770s. George Richardson, a draughtsman in Adam's office, was responsible for this ceiling designed in 1775. The seat furniture consists of twelve carved painted and gilt benches based on designs for very similar pieces provided for Lord Shelbourne. John Linnell had already executed these, some of which were provided for Bowood in circa 1765-6 and others for Lansdown House in 1768. It therefore seems very probable he executed the set for Kedleston, particularly as there is no reference in the ledgers to their having been made by the local carvers. They seem to have been provided circa 1775. Richardson's drawing of the hall includes the benches but they are shown raised on different feet. The sum of £140 paid on account to John Linnell in 1776 may refer to these pieces. They were evidently thought of as noteworthy for, with Lady Scarsdale's bookcase, they were the only items of furniture in the house to be mentioned in the Kedleston catalogue of 17** where they are described as 'Twelve seats, after the ancient sarcophagus'. James Weedon (May 2018)

Commissioned by Nataniel Curzon, 1st Baron Scarsdale for the Great Hall at Kedleston, made by John Linnell c.1775 and probably designed by Robert Adam. Curzon Collection acquired by gift as part of the transfer of Kedleston Hall to The National Trust in 1986.