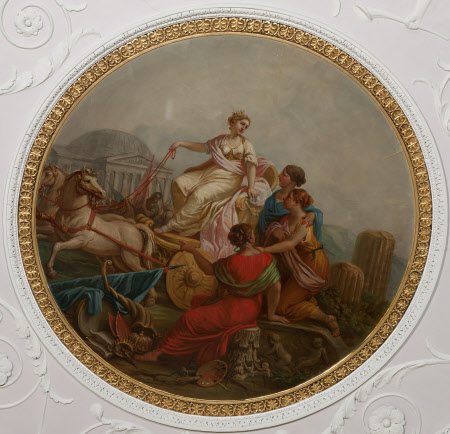 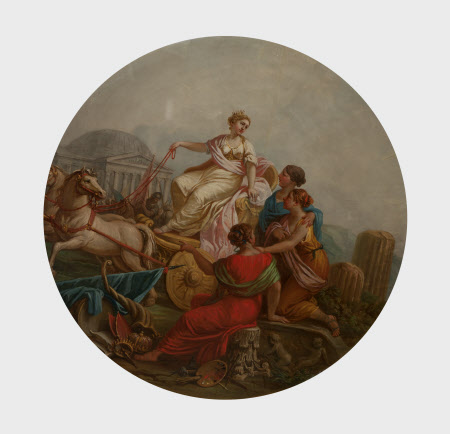 Oil painting on canvas (circular), The Four Continents: Europe by Antonio Zucchi, RA (Venice 1726 – Rome 1796), 1777. One of four oval panels on the Dining Room ceiling depicting the Four Continents- Europe, Asia, Africa and America. Installed by 1777 to replace previous ceiling paintings which had been installed in 1768. The richly decorated ceiling was based on one in the so-called ‘Palace of Augustus’ in the Farnese Gardens – also used as a source for a plate in Charles Cameron’s Baths of the Romans, published in 1772. The 1769 Kedleston catalogue lists the inset paintings by Antonio Zucchi very much as in Adam’s drawing, with roundels of Sculpture, Painting, Music and Architecture in the four corners, various dances and sacrifices in the oblong panels, and a youthful Bacchus in the centre. However, Lord Scarsdale evidently had second thoughts, for Bray in 1777 lists the wholly different scheme, which exists today; the Four Continents in the corners by Zucchi; the Four Seasons in the oblong panels by William Hamilton; and Love Embracing Fortune in the centre, by Henry Robert Morland. At the same time the two overdoor paintings flanking the alcove, described as Sacrifices to Hygeia in the 1769 and 1771 catalogues was replaced by the sculptor William Collins’ roundels of the Harvest and Vintage.

Installed in the Dining Room at Kedleston by 1777 to replace previous ceiling paintings which had been installed in 1768; bought with part of the contents of Kedleston with the aid of the National Heritage Memorial Fund in 1987 when the house and park were given to the National Trust by Francis Curzon, 3rd Viscount Scarsdale (1924-2000)