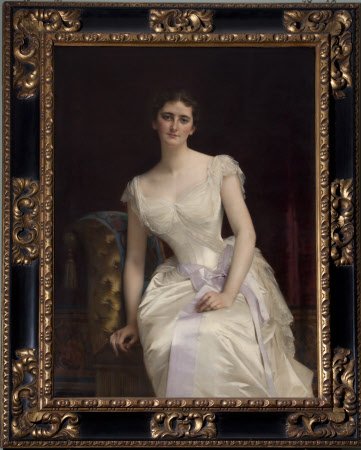 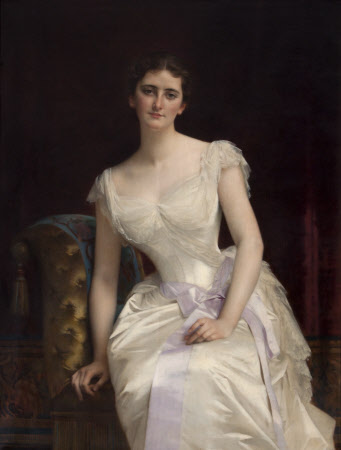 Alexandre Cabanal was, with William-Adolphe Bouguereau (La Rochelle 1825-1905), the foremost academic painter of the Second Empire and afterwards, and dominated the annual Salons in Paris. Cabanel painted relatively few portraits, so when Levi Leiter, Mary’s father, asked him to paint his daughter before launching her into European society, the commission revealed both the power of Leiter’s money and where his ambitions for Mary lay. This ‘coming out’ portrait shows Mary in a sumptuous white debutante gown, with layered lace trim and a bow of pale mauve silk tied at the waist. At twenty Mary Leiter debuted in London, where she met George Curzon (1859-1925), heir to the Barony of Scarsdale and Kedleston Hall. An educated woman, she was drawn to Curzon’s political ambition and his interest in Asia. The two were married in 1895 at Washington DC, in between Curzon’s travels. Mary became Vicereine of India three years later, upon Curzon’s appointment as Viceroy.

Commissioned from Alexandre Cabanel by Levi Ziegler Leiter (1834–1904), c. 1887; hung in the Leiter's Washington D.C. residence until at least 1895, when the sitter was married to George Nathaniel Curzon, 1st Marquess Curzon of Kedleston; brought to Kedleston Hall at an unknown date; thence by descent to the sitter's youngest daughter, Lady Alexandra Curzon (1904-95), wife of Major Edward Metcalfe; on loan to the National Trust since March 1996; accepted in lieu of capital taxes by HM Government (tax satisfied £12,600) and allocated to the National Trust for display at Kedleston in April 1998.