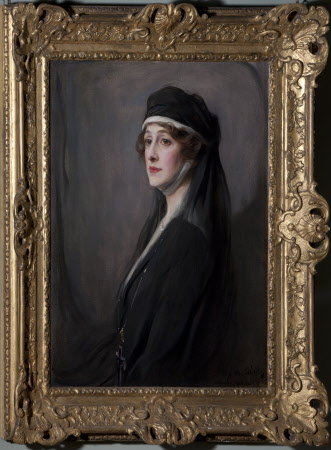 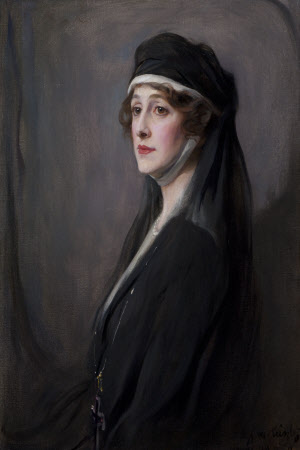 Oil painting on canvas, Grace Elvina Hinds, Marchioness Curzon of Kedleston (1877-1958) by Philip Alexius de László de Lombos (Budapest 1869 – London 1937), signed and dated lower right: P.A. de Lászlo / LONDON. 1916 III 14. A half-length portrait of Grace Elvina Hinds, turned to the left, gazing to the left, wearing the habit of a nursing order. Painted just before the sitter's marriage to Lord Curzon in 1917. She was his second wife and was also American, the daughter of a former Unites States Minister in Brazil and widow of Alfred Duggan of Buenos Aires.

Recorded as originally in the Curzon’s house in Carlton House Terrace; owned by the sitter by whom bequeathed to Richard Curzon, 2nd Viscount Scarsdale (1898-1977); bought with part of the contents of Kedleston with the aid of the National Heritage Memorial Fund in 1987 when the house and park were given to the National Trust by Francis Curzon, 3rd Viscount Scarsdale (1924-2000)