Peasants merry-making before an Inn 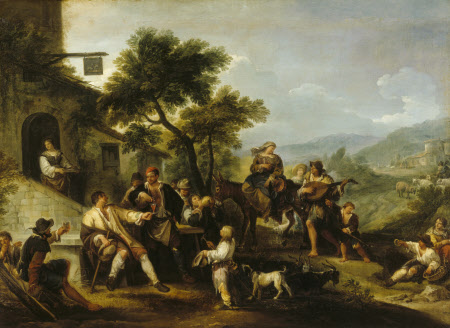 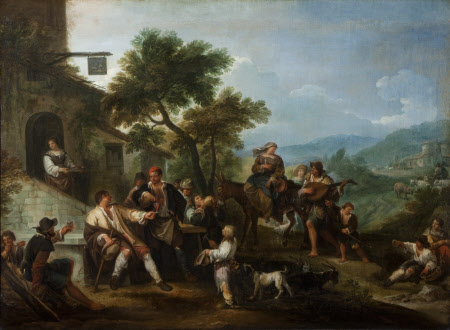 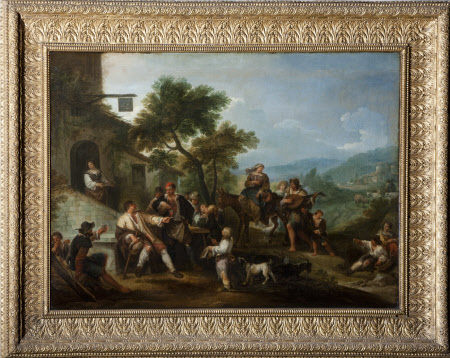 Oil painting on canvas, Peasants merry-making before an Inn by Dirk Theodor Helmbreker (Haarlem 1633 – Rome 1696) also known as Monsù Teodoro, signed on rock, bottom right, in brownish-green: Teodor[o]f. / 1685. Inn, left showing doorway, with small flight of steps and inn-sign hanging on bar, trees in front of inn, and to right, distant hilly landscape with church with round tower to far right; centre occupied with woman seated on a donkey, accompanied by a man on foot holding a coat in his arms; groups of figures to left and right, dog centre, a serving-maid coming down steps of inn left. As his nickname suggests, Helmbreker spent most of his career in Italy, much of it in Rome, and for a time as a Jesuit lay-brother. He specialised in depicting scenes of common-life, in the vein of the 'bamboccianti' and was a pecursor of Locatelli and Monaldi.

Bought in Italy by William Kent (fl. 1742-1761) for Sir Nathaniel Curzon (1726-1804) in 1758; and thence by descent until bought with part of the contents of Kedleston with the aid of the National Heritage Memorial Fund in 1987 when the house and park were given to the National Trust by Francis Curzon, 3rd Viscount Scarsdale (1924-2000)

Verso: Inscribed in pencil on top member of stretcher: No.9 Next Hall Door