Landscape in the Rhine Valley 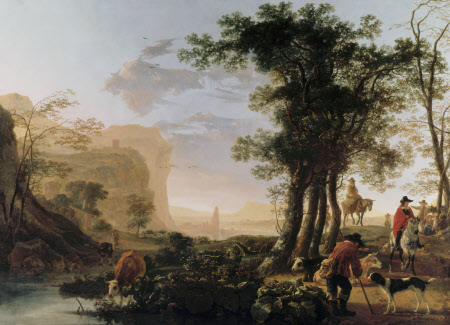 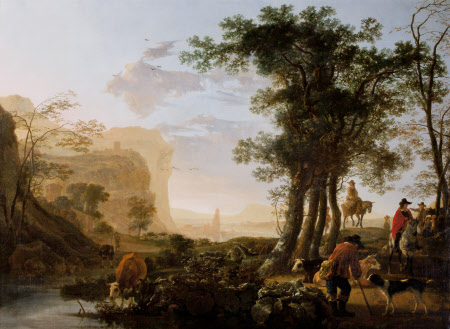 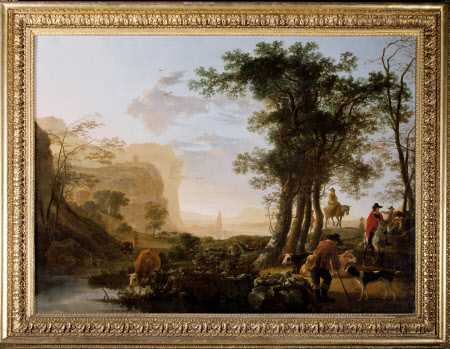 Oil painting on canvas, Landscape in the Rhine Valley by Aelbert Cuyp (Dordrecht 1620 – Dordrecht 1691), signed: A.cuyp. Herdsmen with cattle in a landscape, a horseman in a red coat on a hillock to the right of a row of trees, followed by a peasant on a mule; evening, cloudy sky.

Bought at Dr Robert Bragge’s sale in 1759, for 95 guineas; seen and written about by Lady Elizabeth Seymour, Duchess of Northumberland (1716-1776), notes on a visit to Kedleston in 1766: “the Drawing Room…is spacious lofty & magnificent it is hung wth very fine Pictures on Blue Damask one of wch over a Setee, by Cuyp is the very best I ever saw of that Master there is a Gold Border round the hanging & the frames of the Pictures are immensely expensive.”; bought with part of the contents of Kedleston with the aid of the National Heritage Memorial Fund (NHMF) in 1987 when the house and park were given to the National Trust by Francis Curzon, 3rd Viscount Scarsdale (1924-2000)