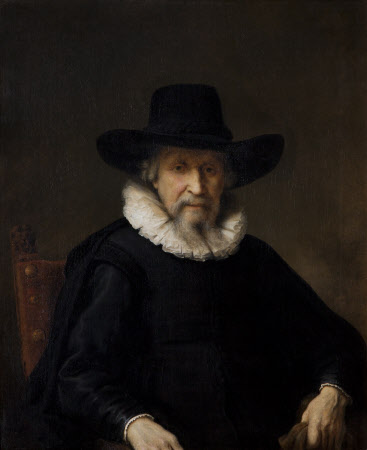 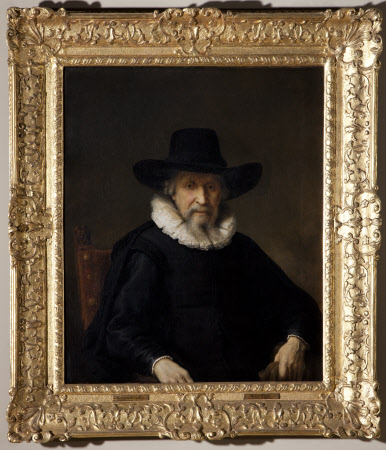 Oil painting on canvas, Head of an Old Man (Possibly Ephraim Bonus, or Bueno [1599-1665]) by Ferdinand Bol (Dordrecht 1616 – Amsterdam 1680), imitation signature added later, top left: REMBRANDT f'., 1640/60. A half-length figure turned to right facing; thin white beard, moustache and white hair. Dressed in black with cloak thrown over shoulders. Pleated white lawn ruff and white frills at the wrists, large broad brimmed black hat. Seated, resting right arm on chair, and holding his gloves in left hand. Chair upholstered in brownish red leather with brass studs; light falls from the right onto face and hands. Believed to be a portrait of the physician Ephraim Bonus. Bol was perhaps the most fruitful and talented disciple of Rembrandt. It is therefore not surprising that many of his pictures, including this one, passed for works by ths master himself. In this position since at least 1796, it was sold to pay death duties in 1930. With the aid of the National Heritage Memorial Fund, it was possible to acquire it when it was again on the market and restore it to its old position.