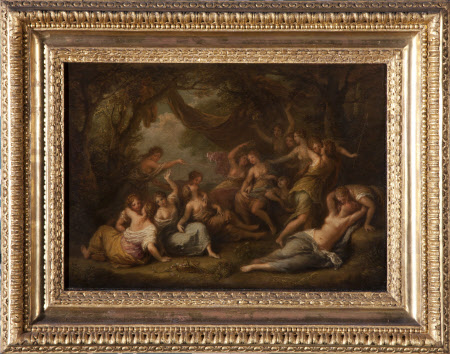 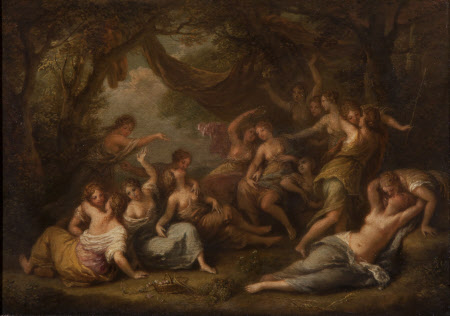 Oil painting on panel, 'Festa Floralia' (after Van Dyck) by Francesco Zuccarelli, RA (Pitigliano 1702 - Florence 1788). A woodland glade, with half-dressed nymphs of Diana (as denoted by the arrow) embracing one another and relaxing; one crowns another with a floral crown (thus accounting for the present title, given to the picture in 1787). Zuccarelli appears to have copied this picture directly from Van Dyck’s oil-sketch, which is first recorded in an English collection (that of Sir John C. Robinson [1824-1913]), and so may well have been in England in the 18th century, turning it into a finished painting, but not, apparently, understanding its subject, to judge by the basket of flowers that he has added to the foreground, and from the title, Festa Floralia, given to it when first recorded at Kedleston in 1787 (the title of Picot’s print of 1783, Nymphs Sporting also fails to suggest knowledge of the actual subject). The subject of Van Dyck’s picture is the kissing contest of the nymphs, from G.B. Guarini’s Il Pastor fido (1590; Act II, scene I) as reported by the victor, Mirtillo, who, disguised as a nymph, holds his floral crown over the head of the judge, who is none other than his beloved Amaryllis (it is a further indication that Zuccarelli misunderstood the subject, that he has given the Mirtillo figure breasts). The sketch is for a middling-sized picture that Van Dyck had painted for Frederik Henry, Stadholder of the United Provinces, by 1632. Auctioned off from Het Loo in 1713, it was acquired for the Archbishop-Elector of Mainz, Lothar Franz von Schönborn, and remains in the possession of his collateral descendants at Schloss Weissenstein, Pommersfelden.