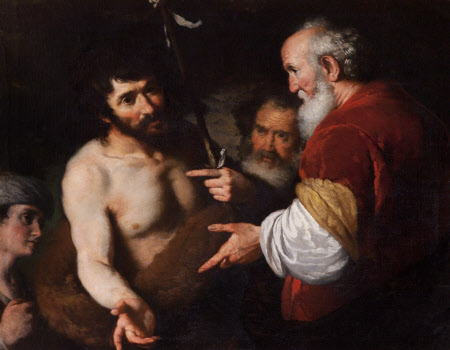 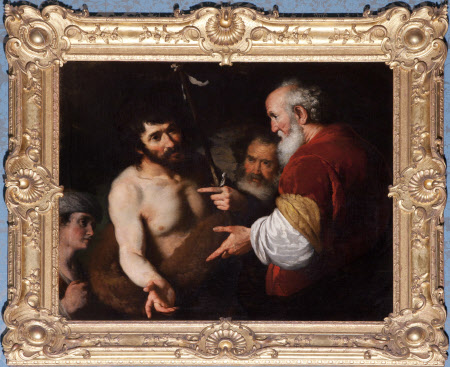 The moment depicted is when John the Baptist, asked if he was the Christ, responded: "One mightier than I cometh, the latchet of whose shoes I am not worthy to unloose". Although both this picture and its pendant thus represent successive revelations of Christ's divinity and mission, they were not originally pendants, though bought, framed, and hung as such by Sir Nathaniel Curzon, 1st Lord Scarsdale (1726 — 1804) in the Drawing Room at Kedleston, along with other acquisitions from the marchand-amateur, William Kent.

Oil painting on canvas, Saint John the Baptist being interrogated about Christ by Bernardo Strozzi (Genoa 1581 - Venice 1644), circa 1618/20. St John half clad with his right hand outstretched, the interrogator has a beard. Bought in the same sale as its pendant (KED.P.183). Long known as 'The Incredulity of St Thomas', it in fact shows St John the Baptist being asked by the priests and Levites sent from Jerusalem: 'Who art thou?' (St John I: 19 - 28)