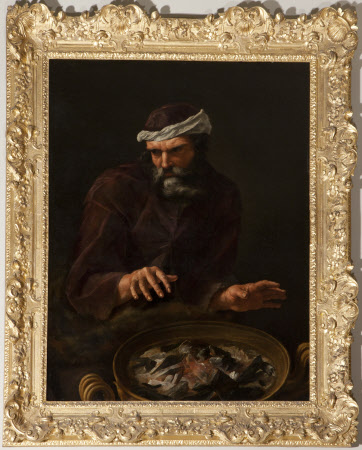 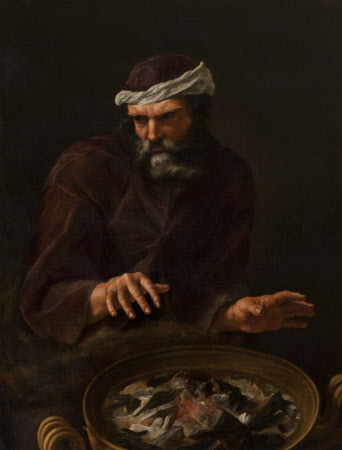 Oil painting on canvas, Winter: a Bearded Man warming his Hands, possibly by Andrea Sacchi (Rome 1599 – Rome 1661). An old man warming his hands over a brazier. Mature man, half-length, facing but head turned three-quarters to left, holding both his hands forward, palms downward, over a brazier of coals; beard and moustache, wearing a turban; basin of coals occupies most of lower section. Not at all characteristic of Sacchi's refined classicism, but the attribution is an old one and merits respect. Such allegories of the Seasons - generally in sets - became popular in the 17th century. One of the groupd of pictures acquried by William Kent for Sir Nathaniel Curzon from the collection of the Marchese Arnaldi in 1758. A related drawing, also ascribed to Sacchi, is in the Cottonian collection in Plymouth Art Gallery.

Possibly the painting mentioned in the posthumous inventory of the goods of the Marchese Niccolò Maria Pallavicini (1650-1714), Palazzo all’Orso, Rome, 29th March – 5th July, 1714, in the Third Anticamera, no.414; bought by the marchand-amateur William Kent (fl. 1742-1761) from Marchese Arnaldi (paired with Salvator Rosa's Philosopher, NT 108866, and exhibited at the Academia del Disegno at the church of the Annunziata, Florence in 1729) for Sir Nathaniel Curzon in 1758 (list 2 October); bought with part of the contents of Kedleston with the aid of the National Heritage Memorial Fund (NHMF) in 1987 when the house and park were given to the National Trust by Francis Curzon, 3rd Viscount Scarsdale (1924-2000)