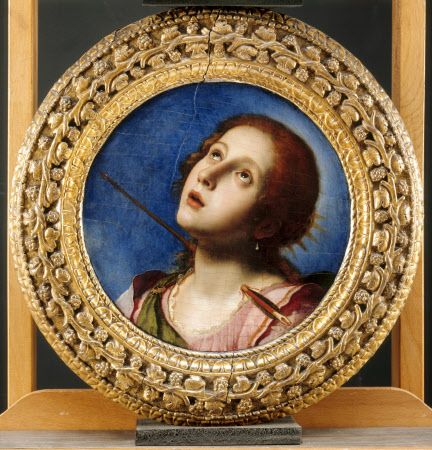 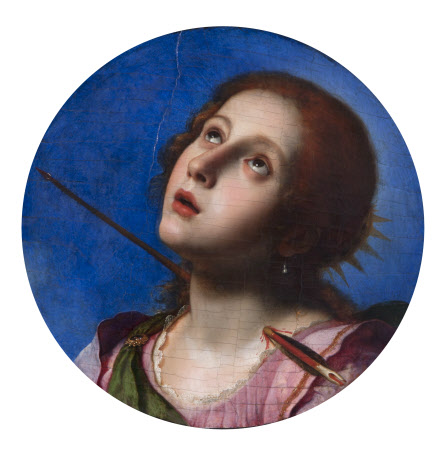 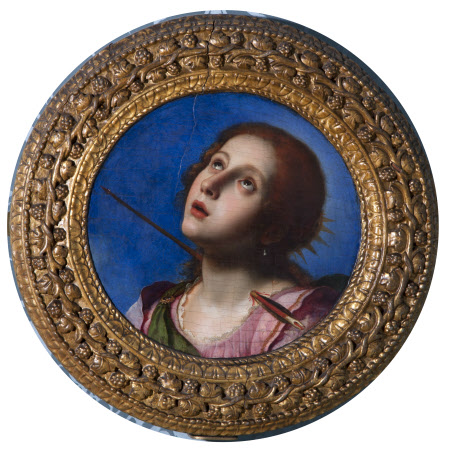 Oil painting on panel (circular), Saint Christina of Bolsena, by Carlo Dolci (Florence 1616 – Florence 1687), circa 1650/55. A young girl, head and shoulders, turned three-quarters to left, face looking upwards, bolt of arrow stuck through her neck from right to left, wearing a dress with oval neckline, pendant pearl earring and crown (?). The Saint who is the subject of this picture was little known to the British (hence her occasional misidentification as Saint Ursula). The original Saint Christina was a native of Tyre, in the Levant, but in the early Middle Ages her identity was conflated with that of another – possibly imaginary – Saint Christina, of around Lake Bolsena. The extravagant story of her martyrdom, first related by Alphanus, Archbishop of Salerno, in 1085, and subsequently taken up in The Golden Legend, relates a succession of attempts to kill her that rebounded on her persecutors, until she was finally killed by two arrows (her usual attributes). Her feast day is July 24th.

Dolci is an artist who remained in favour in Britain despite his often highly Roman Catholic subject matter, above all because of his idealised depictions of sanctity and his porcellaneous finish, so long as Old Masters were collected by the gentry and aristocracy (and even after that: the Herodias in the Stourhead Heirlooms sale in 1883 was bought for the Glasgow Art Gallery). Both his superb artistic skills and his religiosity mainifested themselves procociously in him as a child. He worded with painstaking slowness, aided by his daughter Agnese (d.1689) in his later years, and frequently inscribed the backs of his pictures with the dates of their initiation and/or completion, by reference to the church calendar. Because of this laboriousness he tended to paint easel paintings, cabinet pictures and portraits (a notable example is that of Sir Robert Baines in the Fitzwilliam Museum) rather than altarpieces; nor did he work in fresco. After a period of disfavour ascribable to the adherents of Ruskin and then to the advocates of pure form, Dolci is appreciated once more for his consummate artistry. This picture, though not on public display since the National Trust has owned Kedleston, has always been a desideratum, having been one of the founding purchases of the collection formed by Sir Nathaniel Curzon, 5th Bt,1st Baron Scarsdale (1762-1804), and from that time on until at least the late 19th century, in one of the show roms of the house, Lord – later Lady – Scarsdale’s Dressing Room, latterly known as Lady Scarsdale’s Boudoir. It is one of the pictures bought by the then Sir Nathaniel Curzon (who succeeded his father in November 1758 but had already taken over Kedleston in 1754) at the marchand-amateur William Kent’s sale at Langford’s in February 1757/8 as of St Christiana for the healthy sum of 36 guineas (at Kent’s sale the next year, Lord Ashburnham paid 61 guineas for the version of Dolci’s St Andrew Adoring his Cross now in the Birmingham City Art Gallery). Fired by this and some much larger purchases at Kent’s sales, Curzon then employed him as his agent to buy pictures directly in Italy, to furnish the new palace of art that he was already planning to build, little over half a century since Francis Smith had built a new house for the 2nd Baronet. This picture is thus a foundation-stone of the collection around which the new Kedleston was to be built. The painting was called St Christiana when auctioned by Kent, and was listed as such in all the catalogues of the collection at Kedleston. Both Waagen, who praised it as: “Of a beauty of form and expression, cleanres of colouring, and delicacy of finish, which are not often united in his [Dolci’s] works”, and Charles McCorquodale, when he rediscovered it, and included it in his pioneering exhibition Painting in Florence 1600-1700, at the RA and the Fitzwilliam in 1979, identified the saint as Ursula. The vita of St Christina of Bolsena is hopelessly conflated with that of Christina of Tyre. It is one of the goriest and most extravagant in The Golden Legend, which related that she was the daughter of a “very noble” Roman pagan family (hence her coronet here and in other depictions of her), and that, having survived numerous attempts to put her to death for the obstinate adherence to her eponym, Christ, she was shot with arrows (as seen in a Florentine picture of c.1500, auctioned at Christie’s on 8 December 1993, lot 56; she is a patron saint of archers). The picture is remarkable for its time in being on a panel integral with its Quattrocento-style frame. It must be wondered whether the frame is not really of that period, and whether Dolci has not painted this unusual image over some earlier depiction of the saint, because of some devotional quality believed to be inherent in it. (Notes from the grant application made to the Art Fund prior to the picture being acquired by the National Trust)

Bought by Sir Nathaniel Curzon, 5th Bt at an auction of pictures assembled by the marchand-amateur William Kent (fl. 1742-61), February 1758, lot 43, for 36 guineas as Saint Christina; introduced to Kedleston between 1770 and circa 1778 (probably 1775) (and already earlier than the latter date since it is listed in A View of the Present State of Derbyshire by James Pilkington, which, though only published in 1789, was using an unfound edition of the Catalogue published between those two dates). Continuously recorded at Kedleston Hall, Derbyshire, since around 1775; Christie’s, London, 10 July 2002, lot 138; bought by the National Trust from the owners of the Kedleston Estate, with the help of a grant of £30,000 from the Art Fund.