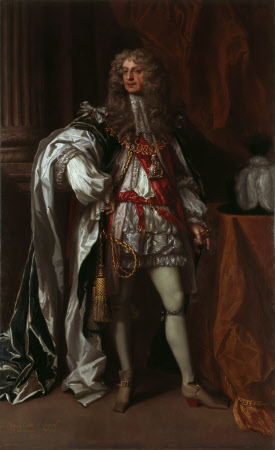 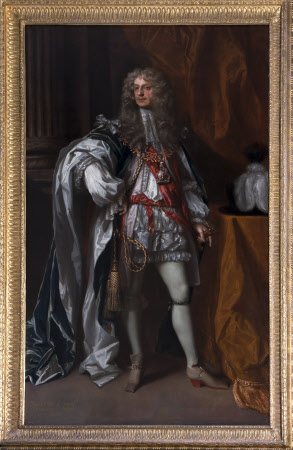 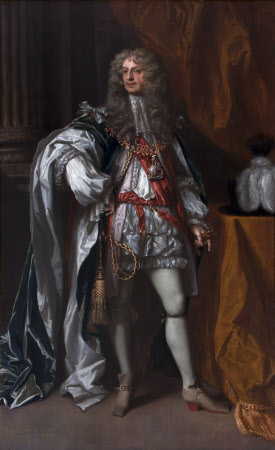 Oil painting on canvas, James Butler, 1st Duke of Ormonde KG (1610 – 1688), in Garter Robes by Sir Peter Lely (Soest 1618 – London 1680), inscribed in yellow below left: [in different script to – KED/P/100, KED/P/101] James Duke of Ormond / Ld Livetennant of Ireland / 1678 / by Sr Peter Lilly [sic]. A full-length portrait in full Garter robes, standing by a table his right hand on his hip, his body inclined slightly to the right, head inclined slightly to the left, gazing at spectator, his right hand on his hip, his left hand holding his sword hilt; his weight on his right leg, his left leg turned to right wearing full-bottomed wig, his cloak draped over and exposing his right arm in full sleeve; a table, on right, with deep fringe on ground, his plumed hat on top. Lieutenant General of the King’s army in Ireland under Charles I, and twice Lord Lieutenant of Ireland after the Restoration, the lst Duke of Ormonde was an upright and loyal supporter of the Stuarts. One of a group of Garter portraits by Lely acquired at Sir William Stanhope's sale in 1733, but appparently not originally associated with the others.

Philip Wharton, 4th Lord Wharton (1613-1696); inherited by Sir William Stanhope from Philip Wharton, 4th Lord Wharton (1613-1696); acquired at Sir William Stanhope’s sale, Albermarle Street, April, 1733, lot 24 by Nathaniel Curzon; recorded in Principal Dressing Room in 1769; and thence by descent until bought with part of the contents of Kedleston with the aid of the National Heritage Memorial Fund in 1987 when the house and park were given to the National Trust by Francis Curzon, 3rd Viscount Scarsdale (1924-2000)