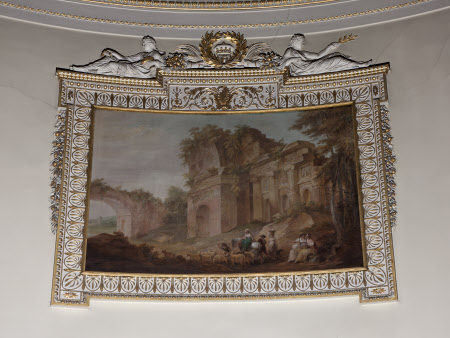 Oil painting on canvas, Classical Ruins by William Hamilton RA (Chelsea 1751 – London 1801). One of a set of four paintings of classical ruins with figures in architectural ornate frames. To the left a large ruined temple with two Corinthian columns to the left and a large ornate arch, centre, which is covered in foliage, through the arch can be seen a small bridge spanning a river which can be seen on the right; behind the river on the right is a large house; in the temple to the left is an altar on which is the statue of a seated female figure, its back to spectator, a woman and a baby sit at the right side of the foot of the altar talking to a man with a basket; in front of the altar is a group of bacchanalian figures.

Overdoors recorded in Saloon by Bray in 1778; and thence by descent until purchased in 1987 by the National Trust from Francis Curzon, 3rd Viscount Scarsdale (1924-2000).