Diana and Arethusa (after Hubert Gravelot) 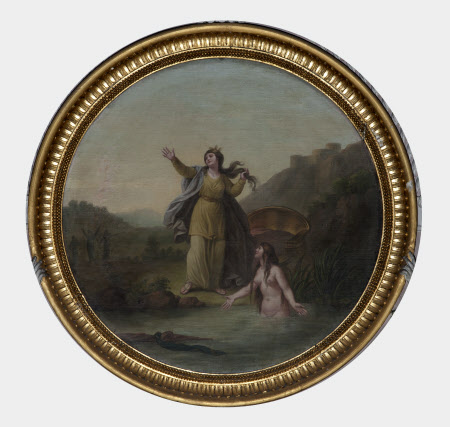 Oil painting on canvas (circular), Diana and Arethusa (after Hubert Gravelot) by William Hamilton RA (Chelsea 1751 – London 1801). Diana centre, stands beside her chariot with her right arm raised and her left holding her hair which is blowing in the wind. Arethusa stands naked in the water to right, looking up at Diana her arms outstretched. Three figures in left background, to the right is a hill topped with a castle.One of two round oil paintings attributed to William Hamilton depicting Diana and Arethusa. Pair with Apollo and Hyacinthus after Gravelot, The Marble Hall, Kedleston. KED/P/61. This scene alludes to the origin of waterfalls, and perhaps intended to celebrate the creation of the landscape of Kedleston, through which the visitor passes to reach the house. Arethusa was rescued by Diana from Alpheus but only at the cost of being turned into a stream. The river-god Alpheus resided in the largest river in the Peloponnese and in some parts of its course flows underground. Alpheus is one of the rivers diverted by Heracles to cleanse the dung-filled stables of Augeas. Alpheus fell in love with the nymph Arethusa (one of Diana’s attendants) when she bathed in his waters which flow past Olympia to the Ionian sea. Arethusa fled from Alpheus and was saved by Diana who changed her into the fountain/spring of Arethusa on the island of Ortygia at the entrance to the bay of Syracuse. Alpheus not to be outdone, flowed beneath the sea all the way to Ortygia and there mingled his waters with those of the fountain. The circular paintings framed in plasterwork above the fireplaces represent Apollo and Hyacinthus after Domenichino (1581-1641) and Diana and Arethusa after Hubert Gravelot (1699-1773): alluding respectively to the origin of flowers and waterfalls but also Apollo and Diana were siblings. Both paintings are attributed to the artist William Hamilton (1751-1801), one of Adam’s Scottish protégés.

Recorded over chimneypieces in Hall in 1771; and by descent until purchased in 1987 by the National Trust from Francis Curzon, 3rd Viscount Scarsdale (1924-2000).