A (Grecian/Roman) Wedding: introducing the Intended Bride (after Farnese antique relief) (Called 'The Marriage of Peleus and Thetis, in the presence of Juno') ('Alcestis, heavily veiled being returned from the Underworld to Admetus') 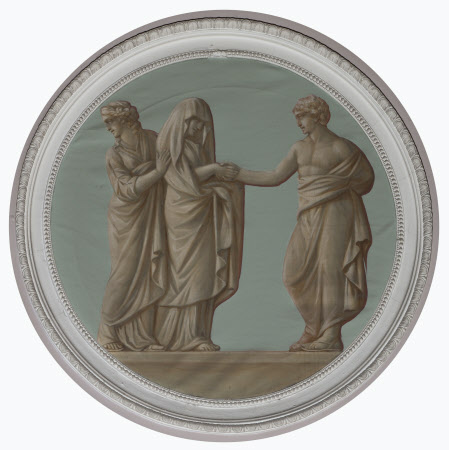 Oil painting on canvas (grisaille) (circular), A (Grecian/Roman) Wedding: introducing the Intended Bride, British (English) School, 1759-69. The first of a sequence of four. There is The Marriage of Peleus and Thetis in the presence of Juno; almost identical composition in a scagliola by Lamberto Christiano Gori (1730 -1801) MDCCLXXIII (1773) at Ashmolean Museum, Oxford, 1991:427, bequeathed by J. A. Brister -Peleus, a Greek hero was married to Thetis, a sea-nymph and they were the parents of Achilles. Eris, the goddess of Strife/Discord throws down an apple, inscribed 'to the fairest', at their wedding feast in the presence of the gods, setting off a train of events that led to the Trojan War; or Alcestis, heavily veiled being returned from the Underworld to Admetus. (Sometimes Hercules retrieves her or Proserpina) Both are derived from Nova Nupta, in Pietro Santo Bartoli, 'Admiranda Romanarum Antiquitatum', (1693), fig. 57, from the relief 'In Aedibus Farnesianis'.