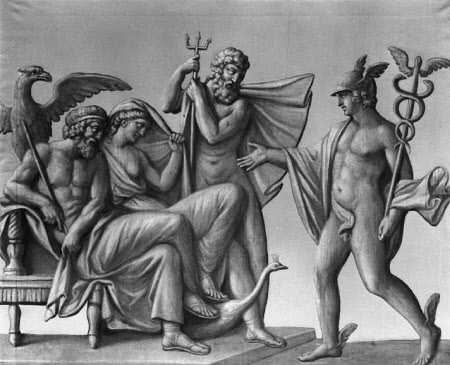 Oil painting on canvas (grisaille), Hermes delivering a Message to Zeus and Hera in the Presence of Poseidon (Mercury delivering a Message to Jupiter and Juno in the Presence of Neptune), British (English) School, 1759-69. The mythological scene depicted is from the Greek poet Homer's The Iliad. The composition is derived from an engraving by Pietro Santo Bartoli in his Admiranda Romanarum Antiquitatum Monumenta (1693), fig. 27 - from an antique relief in Museo Angelonio. It is situated on the east side of Marble Hall at Kedleston.