Athene, driven by Hera, preparing to assist the Grecians and forbidden by Iris, sent from Zeus 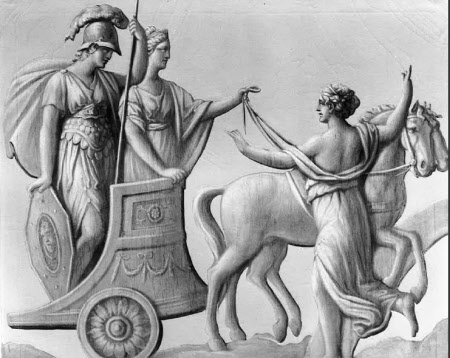 Oil painting on canvas (grisaille), Athene, driven by Hera, preparing to assist the Grecians and forbidden by Iris sent from Zeus, British (English) School, 1759-69. A scene from 'The Iliad' by Homer. Iris (meaning Rainbow) was the link between the Gods and men and accordingly was the messenger of the Gods and is here sent by Zeus (Jupiter) to forbid Athene (Juno) and Hera (Minerva) giving assistance to the Grecians in their battle for Troy.