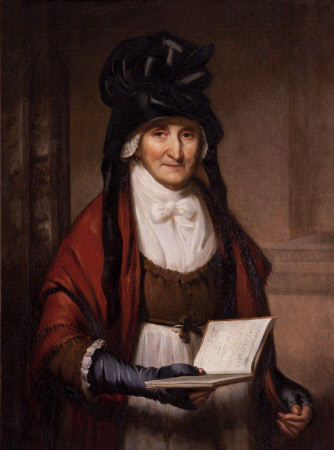 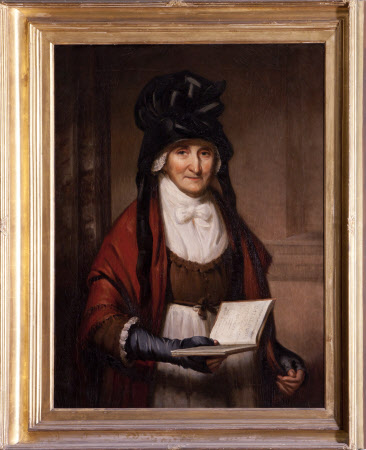 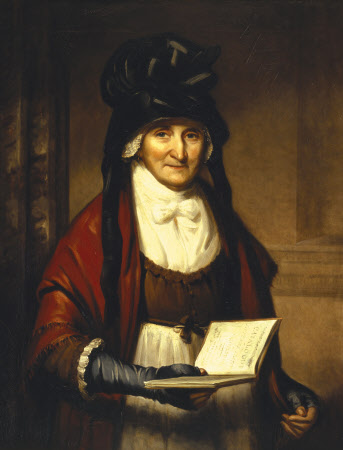 For more than 40 years, Mary Garnett (1724– 1809) served as housekeeper at Kedleston Hall in Derbyshire, and this painting is a fine example of a portrait designed to preserve the link between a person and place as a record for perpetuity. The artist Thomas Barber the elder (c.1768–1843) painted several other portraits of respected household servants for different patrons, and this portrait may have been commissioned by Mary’s master, Nathaniel Curzon, 1st Baron Scarsdale (1726–1804). At this period, the houses of the nobility were regularly opened to curious visitors, and Mary had a reputation as a particularly welcoming and informative guide, with one visitor commenting on her ‘obliging and intelligent’ nature. She is depicted standing in the Marble Hall at Kedleston, holding a copy of the original printed guidebook available for visitors’ use. Dressed in black bonnet and gloves, white gown and dark red robe, she is shown as a respectable, loyal and trusted employee. Mary stayed in service until her death at the age of 85.

Oil painting on canvas, Mrs Mary Garnett (1724-1809) in the Marble Hall at Kedleston by Thomas Barber the elder (Nottingham 1771 - Nottingham 1843), circa 1800. A portrait of Mrs Mary Garnett, housekeeper at Kedleston Hall from 1766-1809. She is shown as a mature woman, three-quarter length, standing beside the fluted alabaster column in Robert Adam's Marble Hall, turned slightly to right, gazing at the spectator. She holds in her right hand an open book, the Catalogue of Pictures, Statues &c. at Kedleston, as if offering it to the next prospective visitor; the first of such guidebooks was published in 1769. She wears a large bonnet with trailing bands over her shoulders and black fingerless gloves.

When tourists visited country houses it usually fell to the housekeeper to show them around. There are records as early as 1657 of a party going to view the Tollemache family seat at Helmingham, and of a group touring Claydon in 1681 (Verney 1894 and 1899: vol. iii, p.406 and iv, p.353). Mary Garnett, the devoted housekeeper of Kedleston from 1766, is pictured here in later life holding in her right hand the catalogue of pictures and sculpture for the Hall’s state rooms. The catalogue was produced and printed periodically from 1769 to about 1790, and Garnett’s personal copy still survives, complete with handwritten supplementary notes about artists and subjects in the margins. A warm and welcoming woman, she was by all accounts an exceptional cicerone who guided several important guests around the house and its collections until her death in 1809. In 1777 Kedleston was visited by the celebrated duo Samuel Johnson and James Boswell, Boswell recounting that ‘Our names were sent up, and a well-drest elderly housekeeper, a most distinct articulator, shewed us the house...We saw a good many fine pictures...There is a printed catalogue of them which the housekeeper put into my hand; I should like to view them at leisure.’ (Boswell's Life of Johnson, Hill and Powell eds. 1934). Two years earlier, Mary Garnett had made an equally favourable impression on the antiquary William Bray (1736-1832): ‘the uncommon politeness of the housekeeper who showed [Kedleston Hall] added not a little to the entertainment’ (Bray 1777, p. 72). James Plumptre's account of her in 1793 not only illustrates a little of the modus operandi of country-house visiting in the 18th century but also implies how special Mrs Garnett was relative to her peers: ‘We entered the House at the Servant's Hall, by a door under the Portico, put down our names, and were then shewn up into the Grand Hall, where the Housekeeper joined us. Of all the Housekeeper[s] I ever met with at a Noblemans Houses [sic], this was the most obliging and intelligent I ever saw. There was a pleasing civility in her manner which was very ingratiating, she seem'd to take a delight in her business, was willing to answer any questions which were ask'd her, and was studious to shew the best lights for viewing the pictures and setting off the furniture.’ (Plumptre 1793, ff. 8-9). Thomas Barber, though based in Nottingham, had a considerable practice among the local aristocracy. There are several portraits by him at Hardwick and Shugborough, as well as at Kedleston. It was unusual for a housekeeper to be painted; this sensitive portrait is a testament, it seems, to the Curzon's fondness and esteem for Mrs Garnett.

Presumably at Kedleston from the time that it was painted, circa 1800; first recorded in the Wardrobe in 1849; among the contents of Kedleston purchased by the National Trust with the aid of a grant from the National Heritage Memorial Fund in 1986, when the house and park were given to the National Trust by Francis John Nathaniel Curzon, 3rd Viscount Scarsdale (1924-2000).