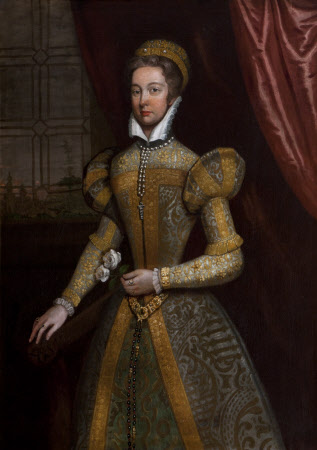 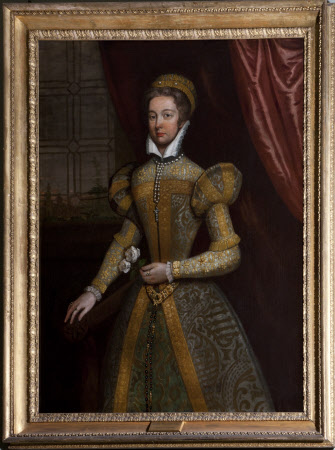 Oil painting on canvas, Mary, Queen of Scots (1542–1587), British (English) School, circa 1820. An early 19th century portrait of young woman, three-quarter length, turned slightly to left, gazing at spectator, holding in her left hand, which is at her waist, a sprig of flowers (two); her right hand rests on a chair; she wears a heavily embroidered gown, a simple, high-ruffed linen collar, stiff bodice, jewelled belt and a string of knotted pearls at the neck; in the background, drapes to the right, a leaded window to the left. Despite the misleading label denoting this as a portrait of Queen Mary Tudor in 1535, this is a spurious portrait of Mary, Queen of Scots, based on the so-called ‘Carleton Portrait’ at Chatsworth

Bought with part of the contents of Kedleston Hall with the aid of the National Heritage Memorial Fund in 1986 when the house and park were given to the National Trust by Francis Curzon, 3rd Viscount Scarsdale (1924-2000)