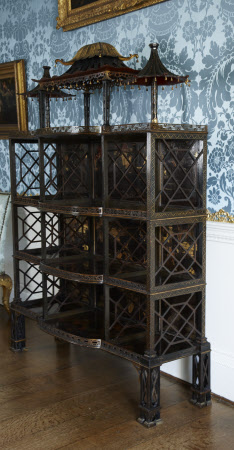 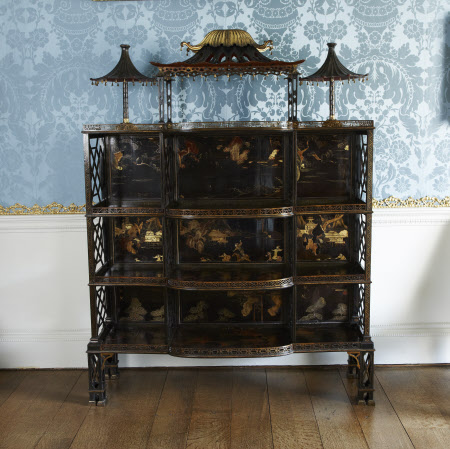 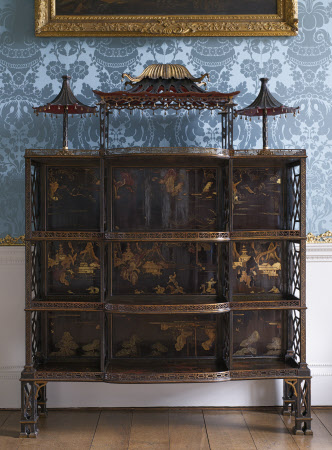 It seems likely that the shelves were commissioned for Lord Curzon's London House at Audley Square. They are similar to a commission by the Duke of Beaufort for a bedroom suite for the Chinese bedroom at Badminton House, South Gloucestershire. Designed and supplied by the workshops of William and John Linnell, circa 1752. This was one of the earliest 'bedroom suites' and included a bed with pagoda canopy with other items of furniture made to match. The V&A collection has the bed, a cabinet from the set (W.55-1952) and two armchairs (W.33 and W.34-1990). During the 1740s and 1750s, Chinese-inspired furniture was very fashionable. Engravers and aspiring cabinetmakers ranging from Battey Langley to Thomas Chippendale included designs for Chinese furniture. Joseph Goupy designed an octagonal House of Confucius at Kew, with walls made up of open lattice work. In 1750, William Halfpenny published New Designs for Chinese Temples, which included this type of Chinese lattice work. Despite her criticism of ‘the barbarous gaudy gout of the Chinese', Mrs. Montague had a Chinese room at her own house in Hill Street, St. James's, decorated with very similar pieces of furniture by William Linnell. The Duke of Beaufort's furniture, is probably the last examples of English Rococo-influenced Chinoiserie, before William Chambers, who had actually been to China, published his Designs of Chinese Buildings, Furniture, Dresses, Machines and Utensils in 1757. A number of orders for japanned furniture were received by the Linnell workshops between 1749 and William's death in 1763. It seems unlikely though that the japanning was carried out by them. The workshop inventory taken in 1763 does not record the necessary materials, such work was most likely put out to a specialist japanner. James Weedon (May 2018)