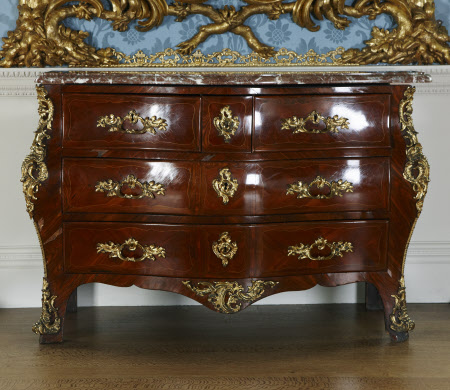 This 18th century commode occupies a prominent position in the State Bedchamber Room against a pier between the windows, surmounted by a mirror glass.

Charles Chevallier came from a distinguished family of Parisian cabinet makers, his father, Mathieu (d. 1732) and uncle, who had a workshop in rue de Saint-Paul, were both ébénistes. The latter probably only made a few pieces in lacquer or vernis martin - a technique which was more fully exploited by his two sons, Jean-Mathieu, known as Chevallier l'Aîné (1696-1768/71) and Charles, known as Le Jeune. Their workshop was under the sign of "A La Croix de Chevalier" situated in the rue de Grenelle, Paris. Charles also had a shop on the rive gauche in the rue du Bac. Although younger than Jean-Mathieu, Charles acted as manager of the business since he was received as a maître first, probably before 1738, whereas his brother was not accepted until 1743. Although there is no documentary evidence to prove that Charles was appointed ébéniste to the crown, amongst his clientele were leading financiers and aristocrats of the day, one being the Minister Ogier d'Ivry, for whom he made amongst other pieces the "gracieux chiffonier de bois de rose". Both Charles and his brother were listed in the 'Almanac d'indication', 1769 as leading exponents of their trade. At times Charles worked in association with colleagues such as Jean Lapie, both their stamps appear on a bureau, presented by Bouvier now in the Musée de Carnavalet, Paris. James Weedon (June 2018)