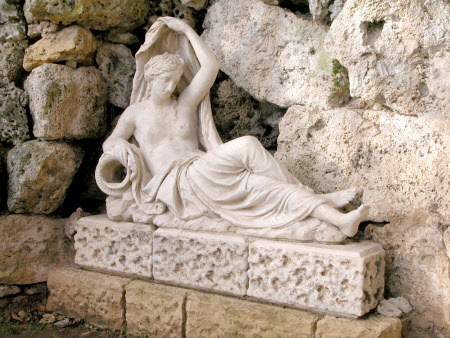 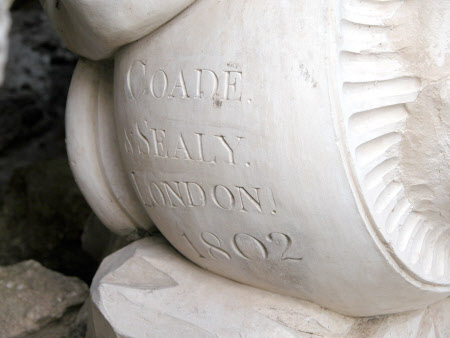 Coade stone, statue of the Roman Naiade, Sabrina, the date of manufacture is disputed and is thought to be either mid 1780s or 1802. The neck of the vase is inscribed "COADE. & SEALY. LONDON. 1802.'. A statue of a water nymph was designed for Coade in the early 1770s by the renowned sculptor John Bacon, this sculpture became the template for Sabrina. One of Brown's greatest achievements at Croome was the creation of an artificial serpentine lake that meanders for 1.5 miles through the estate's central valley. The Croome Lake is a scaled down 'model' of the Severn River, which marked the western boundary of the estate. Sabrina takes her name from the nymph spirit of the Severn. The grotto was originally decorated with exotic shells, coral and gems and supplied with water from one of the branches of the culvert drainage network. This water was directed through a pipe in the grotto and flowed from the urn held under Sabrina's right arm on to the banks of the lake below. The statue is described in an 1824 guide to Croome by its gardener William Dean: Beyond the Grotto, appears the figure of a Water Nymph, reclining on the bank, and holding an urn - through which, the waters, collected from a copious spring, at some distance, are made to flow, in a perpetucal stream, falling among pieces of broken rock; and afterwards mingling with the waters of the lake. The figure is listed in Eleanor Coade's 1784, A descriptive catalogue of Coade's Artificial Stone Manufactory, as 'No. 18 A Naiade, sitting, with an Urn for conveying Water, a six Foot six Inch Figure, £31.10.0'