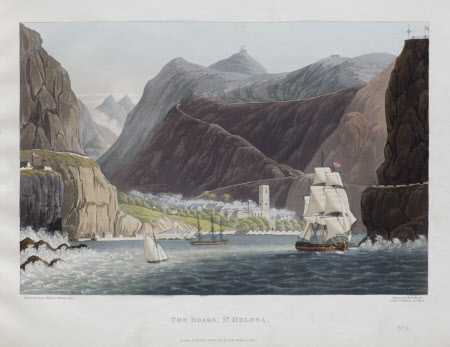 The South Atlantic island of St Helena lies some 1200 miles off the west coast of Angola, and rather further from Brazil. A British colony since the seventeenth century, it was of great strategic importance before the opening of the Suez Canal, especially for the ships of the East India company making the lengthy voyage to the Indian subcontinent. The island remains one of the most isolated places on the surface of the globe, still accessible only by a boat, the mail ship ‘St Helena’ ferrying inhabitants (‘Saints’) and visitors alike to and from Portland and Cape Town. An earlier visitor was in George Hutchins Bellasis (1778–1822), who, as he explained in the preface to the splendid book, had spent ‘a residence at eight months on the island of St Helena’, enabling him 'to gain the local knowledge essential to his subject’. His extended holiday whilst innocent no more than an accident; Belassis’s father was in command of the British garrison at Bombay, and his son was forced by illness to stop off on the island in 1804, on the return leg of a voyage to see his family in India. But it clearly allowed him time to explore and sketch St Helena, which has an area of barely 47 square miles. This plate shows the island's capital, Jamestown, still little altered since Bellasis visited, with the rocky volcanic shore ‘very bold and Majestic’. In his day it was the custom for every ship to pause at the entrance to the roads ‘until the signal is made to advance’, only then being allowed to approach the island more closely. Within a short time the question of security became yet more important, for reasons which Bellasis himself explained when describing the scene: ‘Near the opening between the two mountains, Ladder Hill on the right, and Rupert’s Hill on the left, is a small knoll, or conical hill, at the foot of which is a house called the Briars, marked in this View, though not seen from the Roads; this situation is the more interesting, as it is said to be the place intended for the residence of Buonaparte.’ And indeed Napoleon, recently defeated at Waterloo, was to land on St Helena in October 1815 (Bellasis’s book was issued a month later), inside their six years later in May 1821, still under heavy guard. Bellasis’s eight months in the South Atlantic in 1804 – together with a further visit in 1812 – proved fortuitous, allowing him to produce this impressive book. The plates were engraved by Robert Havell (1769–1832), and the book is dedicated to the Duke of Wellington, a friend of the author in his youth in Bombay, ‘by please distinguished an eminent service, in restoring peace and liberties of Europe the island of Saint Helena is at this time in object of interest to the whole world.’ Text from Mark Purcell's entry in 'Treasures from Lord Fairhaven's Library at Anglesey Abbey', 2013, cat. 25, pp. 92-3.