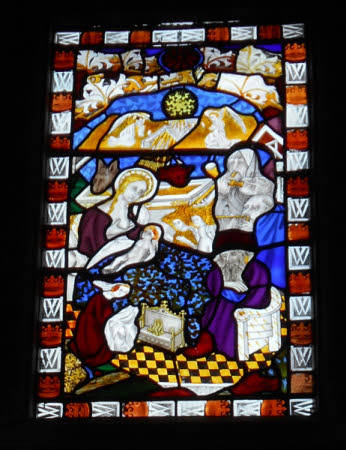 A stained glass panel depicting The Nativity, a copy of the original St Peter Mancroft panel made by John Dixon in 1837. A copy by John Dixon of an original fifteenth century panel from the East window of St Peter Mancroft. The dates are c.1837-41 (an inscription in row 2 states 1841). The panel depicts the Nativity, with the Virgin reclining in bed and offering her breast to the infant Christ. Two angels watch directly over the infant and two more are thatching the roof of the inn/stable below the guiding star. A donkey and bull eat from a trough. Three shepherds herald with horns to the right, and Joseph sits at the end of the bed. A female in the foreground warms a blanket on a fire for the infant. The scene is surmounted by a floral canopy with a sun in the centre. The outer borders show a repeated crowned monogram - an overlapping ‘WW’ for William Wykeham.

A Victorian copy of the original panel at St Peter Mancroft, Norwich. Part of the stained glass collection amassed in the mid-nineteenth century by William Howe Windham (1802-1854) Part of the Windham Collection. The hall and contents were bequeathed to the National Trust in 1969 by Robert Wyndham Ketton-Cremer (1906-1969).