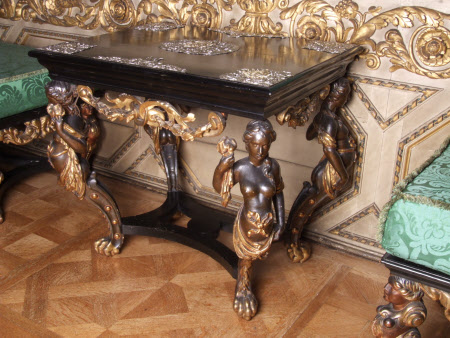 Elizabeth Dysart's side table, circa 1670, carved, gilded and ebonised wood, silver mounted top. The rectangular ebony top mounted with seven foliate plaques of silver and silver gilt centred with the initials 'ECD' (Elizabeth Countess of Dysart) beneath a countess's coronet. Gilded aprons of scrolls and swags of leaves and berries are carved below the top, to the front and sides. The carved female caryatid legs of sinuous form terminate in lions' paw feet. The bronze and gold decoration of the caryatids may date from the 19th century as they were probably originally decorated in silver and gold. The ebony top might have been restored and the stretcher is a later addition. This table was commissioned circa 1670, after Elizabeth Murray succeeded to the Dysart earldom on her father's death in 1655, becoming 2nd Countess of Dysart, and before her marriage to the Duke of Lauderdale in 1672. Before her wedding, she embellished the Green Closet created for her father and this side table was undoubtedly designed for this purpose. The carved giltwood aprons relate to the designs of the dado panelling and the caryatid legs complement the mythological figures in the ceiling paintings. Such caryatids may refer to Charles le Brun's (1619-1690) designs engraved by Jean Le Pautre (1618-1682). Although the design of the present table is likely to be French, the origin of its manufacture is unclear. Such is the case also for the pairs of long stools (NT 1139898.1-2) and cabinet stands (NT 1139896.2 & 1139897.2) made en suite. The table and the other carved pieces are all listed in Ham House's 1677 inventory but none are mentioned in the c.1655 inventory of the Green Closet and the Long Gallery.