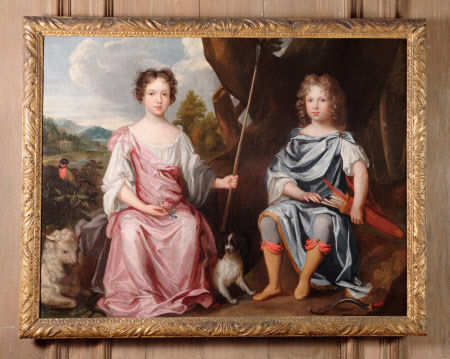 Oil painting on canvas, Edward Graham, later 2nd Viscount Preston (c.1679/81-1710) and his Sister Catherine, later Lady Widdrington (1677-1757), English School, circa 1685. A double portrait, both seated in a landscape, dressed in antique costume for a masque. He is wearing a blue coat and holding a quiver of arrows and she in a pink dress with white blouse, holding a houette, a dog, lamb and a bird in a landscape. Edward Graham was son and heir of Richard Graham, 1st Viscount Preston, and his wife Anne, daughter of Charles Howard, 1st Earl of Carlisle. In 1702 he married Mary, daughter of Marmaduke Dalton and he was succeeded on his death by his only son. His sister married William, Baron Widdrington of Blankney in about 1718. He owned Nunnington from 1695 - 1711 and she owned it with her sister Mary, from the death of her childless nephew, the 3rd Viscount, in 1739 until her death in 1757.It remained in the Graham family until 1839 when Sir Reginald Bellingham Graham Bt sold it and removed the portraits to Norton Conyers or Netherby Castle.

By family descent at Netherby Castle, near Carlisle, Cumberland; Sotheby's 15 July 1987, lot no 35, bought Christopher Gibbs (dealer); acquired by National Trust in 1987 with the support of the Victoria & Albert Museum Purchase Fund and local National Trust Centres and Associations