Dido and Aeneas (or, possibly, Venus, as a Huntress, guiding Aeneas to Dido) 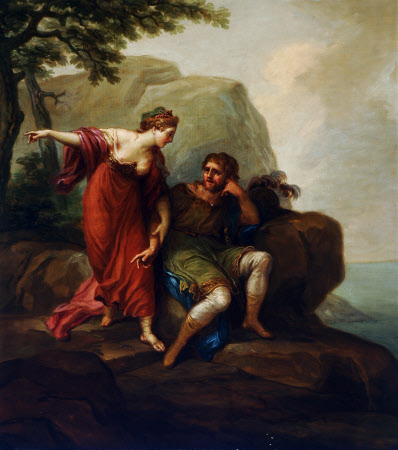 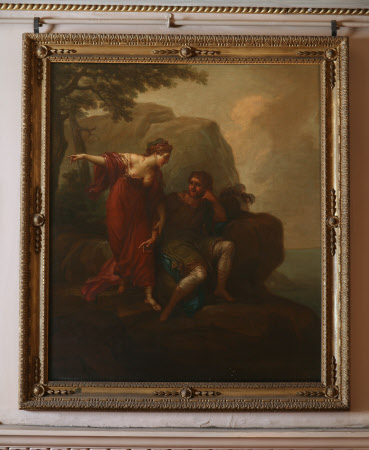 Oil painting on canvas, Dido and Aeneas (or, possibly, Venus, as a Huntress, guiding Aeneas to Dido), previously called: Angelica and Medoro: Angelica and Medoro by the Shore, by Antonio Zucchi, RA (Venice 1726 – Rome 1796), 1773. Classical scene with a couple in a rocky landscape, she is draped in red, he seated on a rock. It is possibly depicting Dido and Aeneas, from Virgil's Aeneid, Book 4: 119 when they go into a cave whilst out hunting or possibly Venus, as a huntress, guiding Aeneus to Dido (Virgil's Aeneid Book1:314-371) but Aeneas is not accompanied. It is also similar to Angelica Kauffman's Calypso calling Heaven and Earth to witness her Sincere Affection to Ulysses, a version of which was at auction at Christie's, London, December, 2007. One of a set of six over-door paintings by Antonio Zucchi.

Commissioned from Antonio Zucchi by Sir Rowland Winn, 5th Bt (1739-1785); sent to Nostell Priory circa 1773; thence by descent; accepted in lieu of tax by H M Treasury and transferred to the National Trust in 1986.