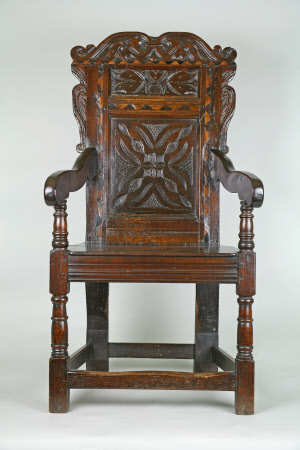 An oak and inlaid panel-back open armchair, South-West Yorkshire, circa 1675. The back with a rectangular panel carved with a stylised cross-hatched four petal flowerhead below a slender panel carved with addorsed tulips, within chequer-inlaid rails. The scroll-carved and arched cresting, typical of Yorkshire, above scroll and leaf-carved ears. The downswept open arms raised on ring- and baluster-turned front supports embracing a solid seat, on moulded seat rails and raised on block and baluster-turned tapering legs joined by rectangular-section stretchers. A similar chair is at Temple Newsam, Leeds.