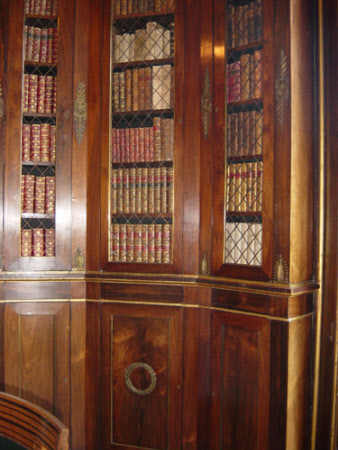 A set of rosewood library bookcases, English, circa 1810 - 1820. Of Empire style. Of various widths, and built-in. Topped by a moulded and gilt-highlighted cornice above upper doors lined with a pierced brass grille and fitted with five shelves. The uprights mounted with mounts cast as roundels between acanthus leaves. With a waist moulding and paneled lower doors, some with gilt brass mounts of laurel wreaths. On a plinth base.

Traditionally, it is believed that the 7th Baronet bought the rosewood furniture which furnishes the octagonal end of the Library at Melford on the Marquess of Hastings' death in 1826, but it is possible that they were purchased in 1813, when the contents of the Marquess' (then Earl Moira) London home in St. James' Place were sold at auction by Phillips on 22nd May, shortly after he left for India in April. This was the same year that the library at Melford was completed.