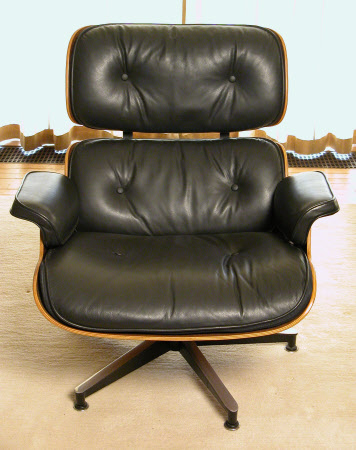 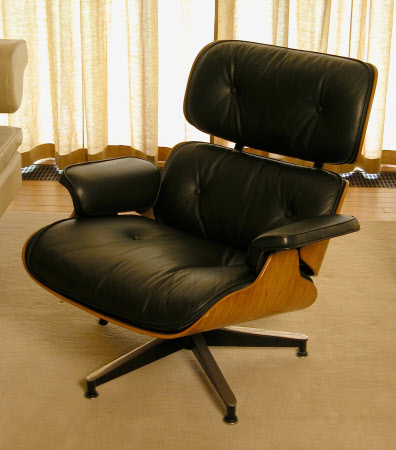 As husband and wife, Charles and Ray Eames, the American designers created many iconic 20th century designs. This chair along with a matching Ottoman was originally owned by the actor Lawrence Harvey and would be given to Patrick Gwynne, who designed and built The Homewood, by his widow in the 1970’s.

An Eames lounge chair, American, designed by Charles and Ray Eames, circa 1953-55, manufactured by Herman Miller, circa 1956-1970, with moulded rosewood plywood frame forming a curved panel for the headrest, a lower curved panel for the back and curved seat, each panel upholstered to the front with buttoned black leather, with padded overcurved armrests, the seat supported on a swiveling column with an aluminium five arm base, the side of each arm painted black, each arm terminating in a foot made up of a black plastic disc impressed 'DOMES OF SILENCE ~ INSULATED' and a steel disc, the interior curved sections of the seat and backs appear to be beech ply. Re-upholstered, circa 2001-03 and re-lined in 2007. The underside of the lounge chair applied with a black label reading 'herman miller'. Together with an ottoman (NT 864325.2) with moulded rosewood frame formed of a curved panel containing a buttoned black leather padded seat, on a swiveling column with four arm base. The first Eames lounge chair and ottoman was designed by husband and wife Charles and Ray Eames as a gift for the director Billy Wilder. The chair was featured in 1956 on the Home show hosted by Arlene Francis and very quickly became an American design classic.