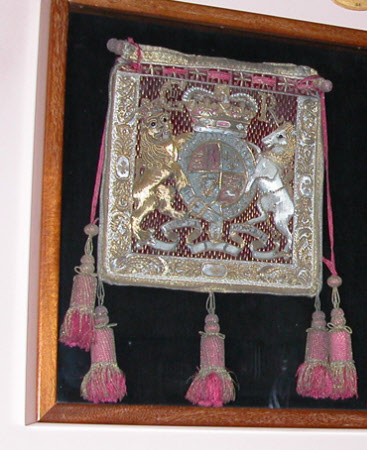 Purse of the Privy Seal Office. George II. Heavily worked in gold and silver thread - the lion in gold, the unicorn in silver - within a gold and silver border. Crimson and silver border at top, and crimson and silver tassels. The Privy Purse (or burse) is dated to the reign of George II (1727-1760) and comprises a square, embroidered purse with five tassels of red silk. Three tassels are suspended from cords hanging from the bottom edge, one at each corner and one from the centre, two tassels suspended from the draw cord threaded through the slashed top edge hang at either side of the purse. The embroidery is raised gold or gilt and silver metalwork and coloured silk embroidery worked on a crimson silk(?) velvet ground. The embroidery depicts the Royal coat of arms for George II, the same as those of his grandson, George III; the forth corner of the arms, at the lower right side, being those of Hanover. The arms are encircled by the garter worked in gold metal thread and blue silk and they are supported by a unicorn and a lion; the whole is surmounted by the Royal crown which is raised. The cap is in red silk velvet, the crown in gold thread with ‘jewels’ in red and blue silk thread and the ‘ermine’ band in silver metal thread with black silk thread ‘spots’. A scrolling banner beneath, in silver thread, bears the inscription, DIEU ET MON DROIT worked in black silk thread. Positioned both sides of the crown are the letters for the device for the reign of George II, ‘G2 R’, and the ground is covered by regularly spaced vertical dashes of gold purl. Enclosing the arms on three sides is a raised border worked in silver thread with stylised foliage worked in gold thread. The edges are bound with gold or gilt metal braid. The embroidered face of the purse is supported on a board (wood?). The interior is lined with a scarlet wool twill fabric. The tassels are constructed from a series of wooden formers covered by red silk thread and overlaid with a gilded metal thread mesh overlay on the body of the former and a gilt metal thread fringe overlay over the red silk tassels A white card label tied to the cord at the top right corner of the purse states: ‘Bag, belonging to John Lord Hervey when Lord Privy Seal, during the reign of George II’.

Part of the Bristol Collection. The house and contents were acquired through the National Land Fund and transferred to the National Trust in 1956