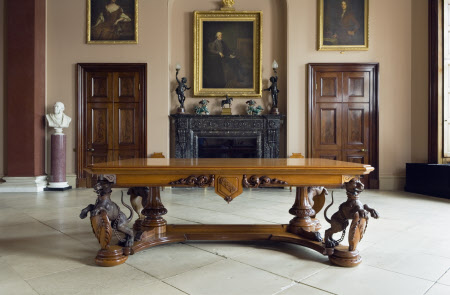 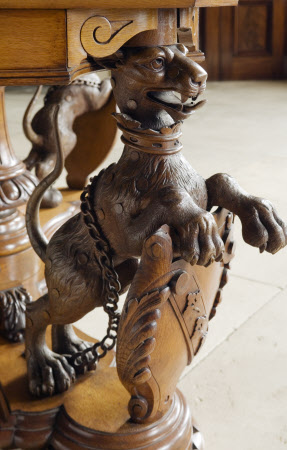 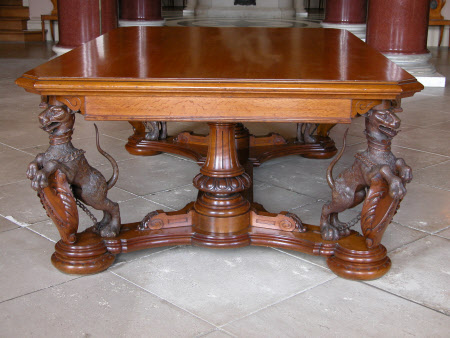 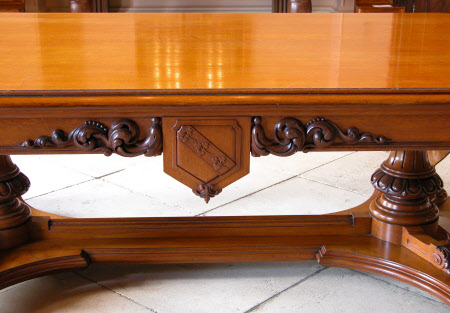 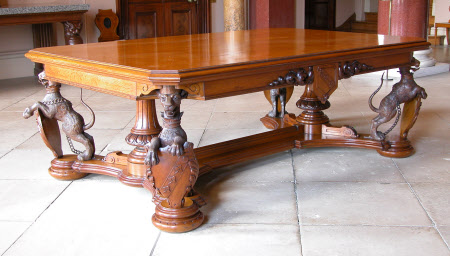 An oak centre table by Banting, France & Co. London, circa 1830 The rectangular top with moulded edge and canted corners above a frieze with an applied shields to each length side bearing the coat of arms of the Hervey family. The top raised on four carved ounces or snow leopards with ducal crown collars tethered to chains and holding further shields with the Hervey coat of arms. With a moulded shaped stretcher and twin central turned tapered and fluted end supports with scrolled brackets.

Banting and France & Co., 27 St.James' Street, London (1813-40) The furniture in the main entertaining rooms at Ickworth was almost exclusively supplied by the firm of Thomas Banting and William France. The invoices for this outstanding group of furnishings are in the Hervey papers (See Suffolk County Records office, Bury St. Edmunds: 941.81/17 and 941/81/11). Banting and France were Royal cabinetmakers and held Royal Warrants in the reigns of George III, George IV, William IV and Queen Victoria. The Hervey family of Ickworth also maintained property in London at 6 St James's Square, as well as Bristol House in Putney and a house at No.19 Sussex Square, Brighton to which Banting and France were to also supply furnishings. Most of the contents of the Brighton property was moved to Ickworth in 1936. Banting and France assisted with the organisation of the sale of furniture by auction at St James' Square in 1814, although the Hervey family kept and refurnished the property, moving the later contents to Ickworth in 1950. Ickworth and its contents passed to the National Trust in lieu of death duties in 1956 although the family leased back the East Wing and continued to live there until it was sold by the 7th Marquis of Bristol (1954-1999) who sold the lease to the National Trust in 1996. See: G Beard & C Gilbert, 'Dictionary of English Furniture Makers 1660–1840' 1986 – Furniture History Society Geoffrey Castle, 'The France Family of Upholsterers and Cabinet-Makers' – Furniture History Society Journal Vol XLI pp 25–43, Published 2005 Robert Huish, 'Memoirs of her Late Highness Charlotte Augusta, Princess of Wales – London: Thomas Kelly Geoffrey de Bellaigue & Pat Kirkham, 'George IV and the Furnishing of Windsor Castle' – Furniture History Society 8 (1972) Ralph Edwards & Margaret Jourdain, 'Georgian Cabinet Makers' 1944, 1946; revised 1951 (3rd edition 1955) (James Weedon 2017)

Part of the Bristol Collection. Acquired by the National Trust in 1956 under the auspices of the National Land Fund, later the National Heritage Memorial Fund. This table was supplied to Ickworth by Banting, France & Co. circa 1830