The Assumption of the Virgin 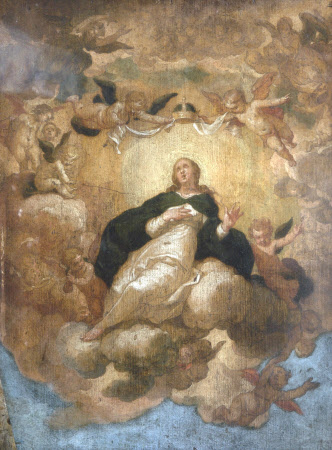 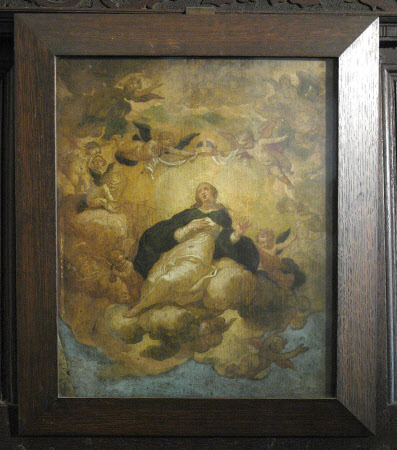 The Virgin is being borne heavenwards by putto-angels, two of whom hold a crown above her head intertwined with white drapery. This sketchy painting could be a recognisable simplified rendering of the Immaculate Conception, possibly for a Franciscan order, rather than as the title suggests an Assumption, or a Coronation. The depiction of the Immaculate Conception (the belief that the Virgin was conceived by her mother Anne also without Original Sin) became popular in Spain in the 17th century, since the encouragement of the Cult after the 1618 Papal Bull. Usually there is a moon under her feet and she is surrounded by the sun, as recounted in the Book of Revelation, and crowned by twelve stars. Wearing a white robe and blue cloak, as here, sometimes she is seen accompanied by cherubs either holding her emblems: an olive branch, palm, rose, an iris and a mirror or crowning her.

Oil painting on panel, The Assumption of the Virgin or ?The Immaculate Conception, manner of Abraham Bloemaert (Gorinchem 1566 – Utrecht 1651), 18th century. The Virgin is being borne to heaven by putto-angels, a couple of whom hold a crown above her head intertwinerd with white drapery.

Accepted by HM Treasury in lieu of Inheritance Tax and allocated to the National Trust, Bradley Manor, 2002

Bradley Manor, The Woolner Collection (accepted by HM Treasury in lieu of Inheritance Tax and transferred to The National Trust in 2002)