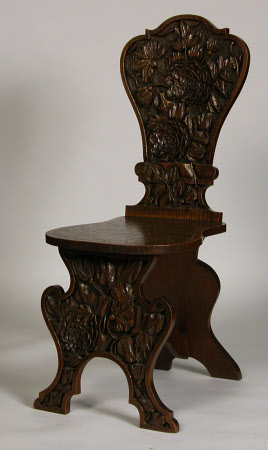 One of a set of three carved oak hall or 'sgabello' chairs, English, circa 1900. One carved with thistles, one with shamrocks, one with roses, each with arched and waisted solid back, rounded and shaped seat and with front and back angled supports.

Carved chairs like these were particularly associated with Venice in the 16th century but became popular all over Europe. They have long been known as sgabelli, ultimately derived from the word scabellum (Latin for 'stool'). In Venice they often stood in sets along the walls of the portego . This was a long room that was used for family celebrations, display and hospitality. Here the carved detail appears to represent the National flowers of Ireland, Scotland and England.