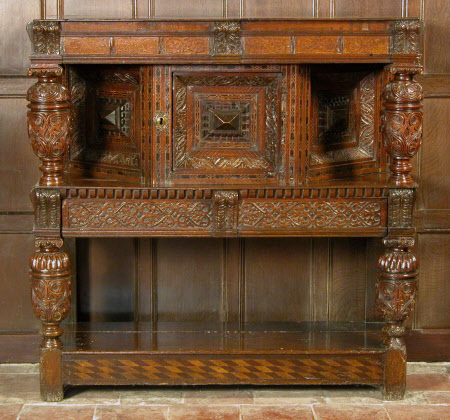 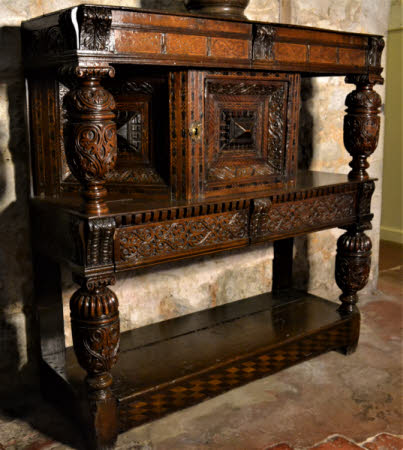 An oak, elm and marquetry livery cupboard, English, probably South West, circa 1630. The upper section with foliate inlaid frieze set with corbels, above a central door with recessed panel, chequer-inlaid frame and centred with an ebonised boss, flanked by similar canted side panels and a pair of strapwork carved bulbous elm columns with Ionic capitals, the frieze drawer carved with elaborate strap-work and raised on similar bulbous columns joined by an undertier set with cube marquetry to the rail, inside the cupboard is a (slightly torn) dealer paper label 'Early 18th Century English Furniture, Kent Gallery Ltd, 44 Conduit Street, London W1'.

The Sneyers bequest of 1987. Kent Gallery, Conduit Street, London (according to label). The Kent Gallery were one of the major dealers in antique furniture during the early decades of the 20th century. The Gallery was established by Edward Horace Benjamin, who by the 1920s had entered into partnership with Lionel Harris jnr (b.1903) and Maurice Harris (b.1900), the sons of the well-known dealer Lionel Harris (1852-1943) who had established 'The Spanish Gallery' by 1907. ('Antique Dealers: the British Antique Trade in the 20th Century' University of Leeds).