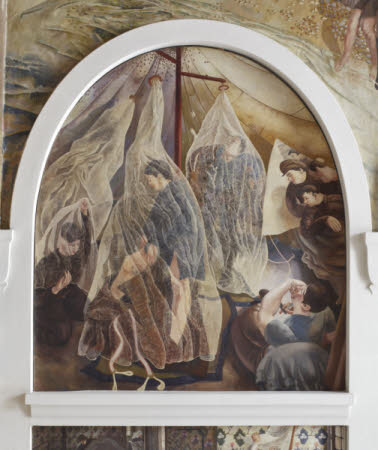 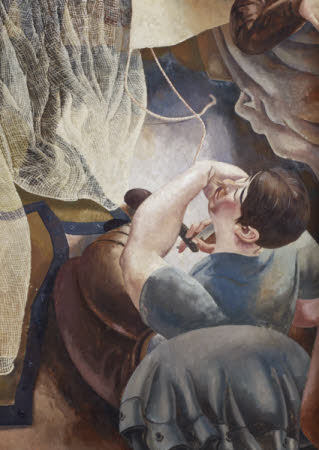 Reveille (the morning wake-up) shows soldiers looming into the tent, announcing the fact that the war is over. In the chapel itself, the Resurrection (or the end of the War) has already taken place in the narrative sequence. Soldiers are shown dressing under mosquito nets, with malaria-infested mosquitoes hovering above them. Spencer had suffered from malaria whilst serving in Salonika, and it is probable that Harry Sandham, the dedicatee of the chapel, had died of complications related to the same disease.

Oil painting on canvas, Reveille by Sir Stanley Spencer, CBE, RA (Cookham 1891– Cliveden 1959), 1929. Soldiers are told that the war is over. The soldiers are dressing and shaving under mosquito nets, when their companions look in to tell them that the war is over. The idea of Reveille (the morning wake-up) is the physical equivalent to Resurrection, and the picture connects with 'Dug-Out', occupying the same position in relation to the east wall; both scenes were originally thought of as a 'Resurrection' picture. On a spiritual plane the soldiers on the right have perhaps seen the truth of the Resurrection and are eager to inform their colleagues.