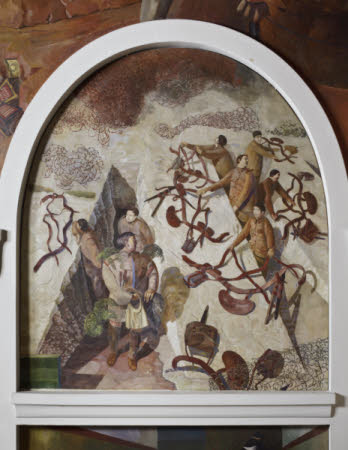 Dug-out is the first in the narrative sequence of the Sandham canvases to depict a scene set at the Macedonian front. Soldiers in two trenches prepare their equipment for a ‘stand-to’ order about to be giving by their sergeant, whose uniform is camouflaged by fern fronds. A tense, sombre atmosphere is created by the piles of barbed wire that appear like black thunder clouds, and by one of the soldiers looking ominously towards the right, which in the chapel is the east wall and Spencer’s Resurrection.

Oil painting on canvas, Dug-Out (or Stand-to) by Sir Stanley Spencer, CBE, RA (Cookham 1891– Cliveden 1959), 1928. Spencer now transports us the first time to the Salonika front in Macedonia. He intended the thundercloud pattern of barbed wire to indicate a contrast between the threatening atmosphere of this scene and the relative domesticity of the preceding scenes. As they emerge from the trenches, the expressions of weariness and fear in the soldier's faces, except that of the sergeant in the foreground, makes this the most intense scene in the series. But the tension is relieved as some of the men realize what is happening behind them: they are looking beyond death towards the Resurrection on the East Wall. The painting was developed as a later alteration. With removal of the proposed surgical operation painting from the scheme, and the repositioning of Kit Inspection to the now vacant space, a new painting was required. For this Spencer composed Dug-Out (or Stand-To) from an excerpt of The Resurrection of Soldiers.