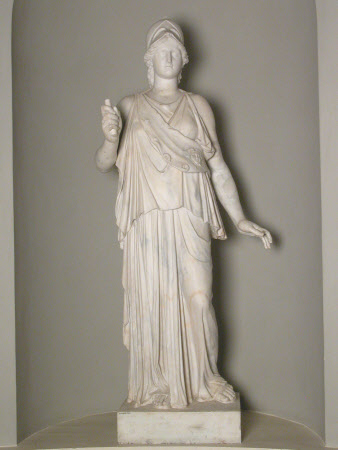 Marble statue of Minerva, Roman goddess of wisdom, helmeted and wearing a long chiton and himation, her aegis with the serpent-haired head of Medusa, fringed with serpents, in the form of a strap across her breast. In her right hand she holds an object, perhaps intended as an element from a spear. Italian, probably Rome, an eighteenth century restored antiquity. The torso is ancient, set into a later base, the head, arms and left foot are restorations.

Probably acquired for Robert Adam's remodeling of the Marble Hall in the 1760s. First recorded in 1782 inventory of Osterley in the Marble Hall. Purchased from George Child-Villiers, 9th Earl of Jersey (1910-1998) by HM Government in 1949 for the Nation and vested in the Victoria and Albert Museum; transferred to the National Trust in 2002.