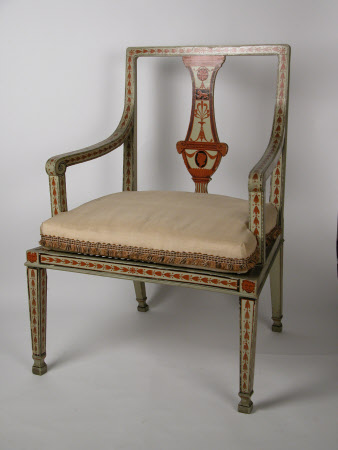 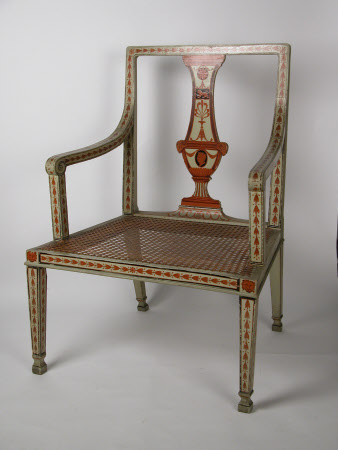 This chair was designed by Robert Adam, the famous 18th century designer and architect. A set of 8 was created to match the design of the ‘Etruscan’ room at Osterley. The Etruscans were an ancient Italian civilization which, during the mid 18th century, was promoted as an origin of classical design.

One of a set of eight beech arm or 'elbow' chairs, painted in terracotta and black on a greyish-cream ground. Square cane seat with cushion, OST/F/70 i. Square back with vase-shaped splat painted in imitation of a Greek vase with classical motifs consisting of from the top - a patera, a lion on a plaque, an anthemion, a Greek key pattern flanked by ram's heads, from which hang draperies over a cameo head of a Roman emperor. The arms sweep down from the back to terminate in a painted scroll resting on a straight support. Straight square legs with square feet. Back, arms, seat-rail and front legs painted with trailing husks and the front corners of the seat-rail with lions heads.