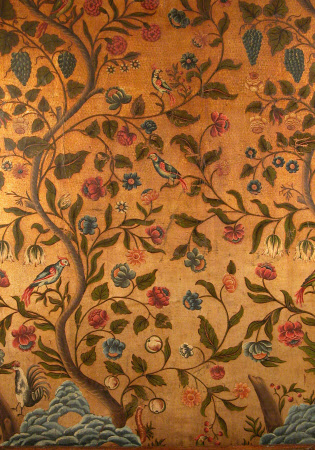 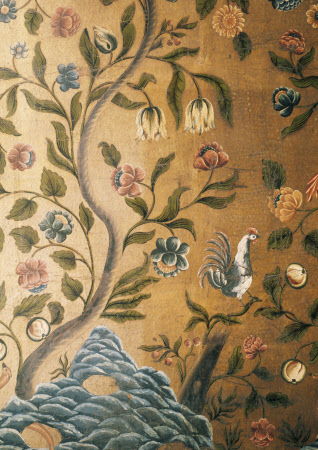 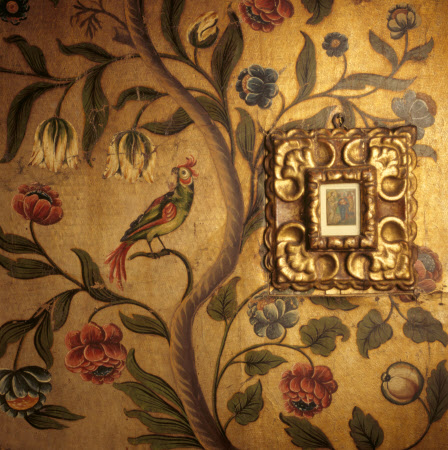 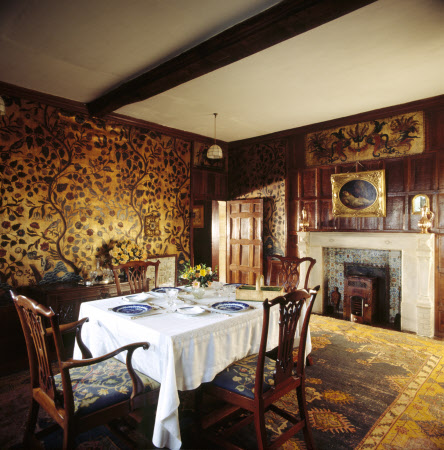 Embossed and polychrome-decorated leather wall hangings, Dutch, mid-18th century, which was also used for the screen in the Parlour [NT 761031] Each hanging decorated with a meandering slender tree or plant, issuing a variety of flowers and leaves, atop a grassy mound. Some of the leather panels reduced in height at the top.

The decoration of the hangings was inspired by Indian chintz designs. The hangings were possibly made in Amsterdam or Dordrecht in the Dutch Republic or in Mechelen or elsewhere in Flanders (information courtesy of Dr Eloy Koldeweij, Cultural Heritage Agency, the Netherlands). Four of the panels are remarkable for the large dimensions of the skins, but appear to have been trimmed at the top. A set of ten hangings of a very similar design (but with painted draperies along the top), mounted as a folding screen, was sold at at auction at Christies South Kensington, London, on 27 October 2010 (lot 278).

Listed in the Dining Room in the inventory taken at Bateman's in 1939. Bequeathed by Caroline Starr Balestier, Mrs Rudyard Kipling (1862-1939) with Bateman’s and its contents. Purchased by the Kiplings for 100 guineas from William Moens of Tweed, Lymington, Hampshire, in 1902. Moens had in turn bought it from the Burgomaster of Broek in Waterland near Amsterdam in 1877 (Elsie Bambridge to Mr Matheson, 1940. National Trust Archive, Batemans, Wiltshire and Swindon History Centre). The Western Gazette reported on 22 August 1902: On Wednesday morning Mr. W.J.C. Moens of “Tweed” received a visit from Mr. and Mrs. Rudyard Kipling. They came by motor-car from Rottingdean, near Brighton, on Tuesday, put up at Southampton for the night, and came on to Boldre [near Lymington] in the morning. They took their host for his first ride in a horseless carriage, and although the Commoners Champion is such a staunch lover of horses he was favourably impressed with the machine, which did not exceed the legal limit. [...] Mr. and Mrs. Kipling left for home after one o’clock. Source: Richard Howell, 'One Spot Beloved Over All - The Kiplings and The Bateman's Estate 1902-1939' (University of Buckingham, 2020)