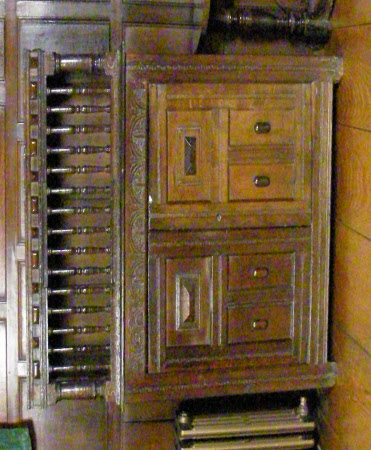 A livery or food cupboard, English, circa 1680, on an associated joined oak court cupboard base, English, mid-17th century. The livery or food cupboard having a boarded top above a toprail with applied cornice and base mouldings, and (probably later) applied rectangular and pyramid-shaped bosses. Raised to the front on a pair of columnar supports and with spindle-filled front and sides, the front with a hinged section forming a door. The block beneath the proper right support carved with the initials 'S' (large) and 'TW' (small); the block beneath the proper left support carved with the initials 'C' (large) and 'TW' (small). The top edge of the base fitted with an applied moulding inside which the livery or food cupboard sits. And with a foliate lunette-carved toprail, and moulded rails with punched decoration and carved leaves. Fitted with a pair of panelled doors (the proper left door probably replaced), each of one large panel above two small panels, with applied bosses. Raised on extended stile supports. -- Traditionally considered to be a rare 17th century livery or dole cupboard, but almost certainly two completely separate pieces of 17th century furniture joined together in the late 19th or early 20th century. The livery or food cupboard was probably once wall-mounted, or may possible have been raised on legs joined by a shelf.

Listed in the Parlour in the inventory taken at Bateman's in 1939. Bequeathed by Caroline Starr Balestier, Mrs Rudyard Kipling (1862-1939) with Bateman’s and its contents.

Blocks at bottom of front corner supports of top cupboard: 'S' and 'C', and 'TW' twice