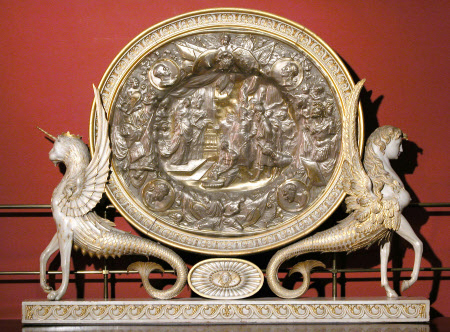 So many of the Hoares were named Henry or Richard that they are distinguished by nicknames. Henry IIs great achievement was the creation of the famous landscape garden with its lake and temples, is known as “Henry the Magnificent”.

Gilt metal dish, oval, repousse with the Death of Cyrus at the Hands of Queen Tomyris (529 BC), the raised rim with military trophies, bound prisoners, putti and circular classical medallion heads of Emperors by Heinrich Mannlich (c.1625-1698), Augsberg, late 17th Century. The dish was presented to Sir Richard Hoare (1709-1754) by the citizens of London when Lord Mayor of London in 1745. The Stand supplied for Sir Richard Colt Hoare by Sefferin Alken (1717- London 1782).