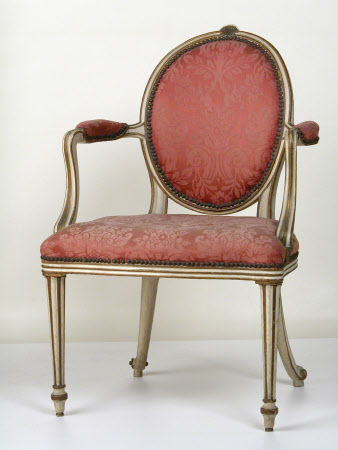 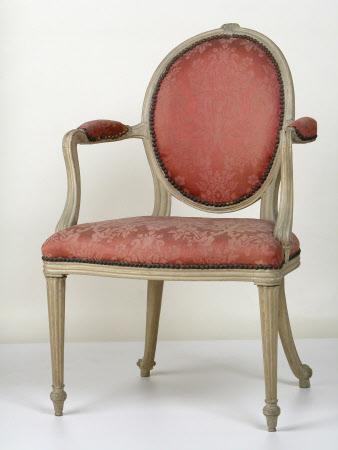 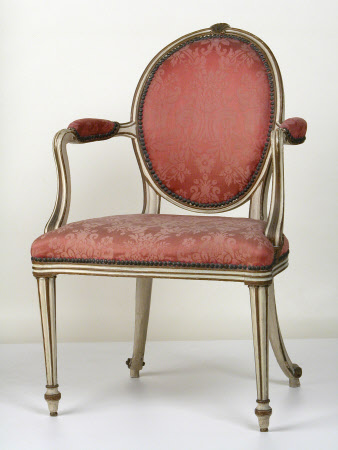 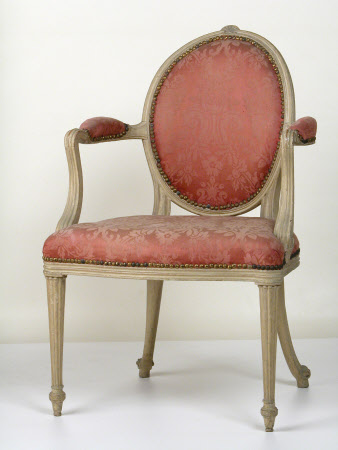 A set of six white painted and parcel gilt beech and upholstered open armchairs, attributed to Haig & Chippendale (fl.1779-1796) London, circa 1780. Probably commissioned by Sir Richard Colt Hoare for his London home at Lincoln's Inn Fields, a commission which ran from September 1779 to November 1780. The oval padded back with a moulded curved frame and shaped arms with padded elbow rests, the overstuffed seat raised on flared reeded turned tapered front legs and moulded outswept back legs with scrolled feet.Upholstery later, decoration refreshed.

Haig and Chippendale’s invoice dated June & July 1780 – ’10 rich carved cabriole armd chairs neatly Japand barré colour and white, stuffd, covered, and finished with best gilt nails (exclusive of damask) £36- and Fine barré stripe cotton cases to do. £5-10-- ’ And ‘A large rich cabriole sofa neatly japand to match – on castors – stuffd, and covered, the seat bordered and finished with best gilt nails £14- and 2 fine downe bolsters cover’d do. (exclusive of damask) £2-4-’ and ’34 yds rich barré colour mixt damask to cover the sofa and the chairs £12-15-‘ The extensive account sent to Sir Richard Colt Hoare for his London address at Lincoln's Inn Fields was settled promptly by the end of January 1781. Amongst the furnishings and decoration for the Drawing Room the furniture included a set of '10 rich carved cabriole armchairs and a large sofa and 2 Horse firescreens' jappanned to match the curtain fabric. Four of the chairs and the sofa (NT 731555) are probably those now at Stourhead. The other two chairs are on loan to Melford Hall, Suffolk. The 'pair' to the sofa is of a slightly later date, construction and shape of the front rail is slightly altered as is the webbing used and its configuration (which is the original), suggesting a different time of production but almost certainly by the same workshop. The second sofa was probably commissioned directly for Stourhead after the afore mentioned arrived there but no bill survives to confirm this. A similar set of chairs, known to be from the Chippendale workshops are at Burton Constable, Yorkshire. For further discussion and extensive published research see: Goodison, Judith ‘The life and work of Thomas Chippendale Junior’ PWP 2017 Goodison, Judith ‘Thomas Chippendale the Younger at Stourhead’ Furniture History Society 2005 (Vol. 41) pp. 57-116 Gilbert, Christopher ‘The life and work of Thomas Chippendale’ London 1978 Vol.1 pp.235, 267 Beard, Geoffrey & Gilbert, Christopher ‘The Dictionary of English Furniture Makers, 1660-1840’ Furniture History Society 1986 pg.169 Dudley Dodd & Lucy Wood, 'The Weeping Women commode and other Orphaned Furniture by the Chippendales at Stourhead', in Furniture History XLVII (2011) James Weedon (March 2018)

Probably supplied by Haig & Chippendale in 1780 for Sir Richard Colt Hoare's London house in Lincoln in the Fields. Probably transferred to Stourhead c.1795. Stourhead; given to the National Trust along with the house, its grounds, and the rest of the contents by Sir Henry Hugh Arthur Hoare, 6th Bt. (1865 – 1947) in 1946. Two chairs on internal loan to Melford Hall, Suffolk.