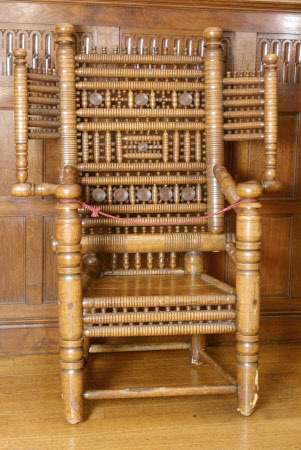 For some a piece of furniture is about how it looks and for others it’s the story behind it – this has both.

A large figured ash winged Turned chair or throne, English, circa 1600-1650. Tightly ring-turned throughout, the front and back posts with ball finials, the back, the wings and the front rail all filled with spindle galleries, the back additionally with two rows of fixed roundels, a further small roundel positioned at the centre of the back, the seat trapezoid-shaped, the legs with plain turned low stretchers. Reputed to have been used for the enthronement of the last Abbot of Glastonbury.

This is a very fine example of a Turned chair. There is an abundance of detail including multiple small turned members and decorative rotating discs. The wings are an additional unusual feature, more often they are not present on such chairs. The basic definition of a Turned or Turner’s chair is that all parts are lathe-turned (apart from the obvious seat board) and joined together on the mortice and tenon principle. The early development of Turned chairs is rather opaque, although they do feature in illuminated manuscripts such as Topographia Hiberniae (circa 1200) and are found right across medieval Europe. Although many of them survive today, many in Wales and the West Country, dating them can be problematical without firm provenance because, as a type, the design persisted over a long period of time and even among furniture specialists there are differing opinions. Limited research has been undertaken on such chairs and a study of regional or workshop types would be welcome. The more elaborate versions were almost certainly designed as chairs of authority (for a Justice of the Peace for example) or for ceremonial purposes (such as the Welsh bardic eisteddfod chairs). There are two types, those with three legs and those with four, the latter being less common. The Dunster chair is in good company as other notable four-leg examples are in The Shakespeare Birthplace Trust, Stratford-upon-Avon (also with wings), The Burrell Collection in Scotland and St Fagan’s National Museum of History in Cardiff. Two examples of the three-leg type, though smaller and much less elaborate, are also in The Outer Hall at Dunster. For a more detailed study and discussion see: Bebb Welsh Furniture 1250-1950, Vol I, Saer, 2007 p.135-142. Chinnery Oak Furniture, The British Tradition, ACC, 1979 and revised 2016, Fig 2:73 - 2:87.