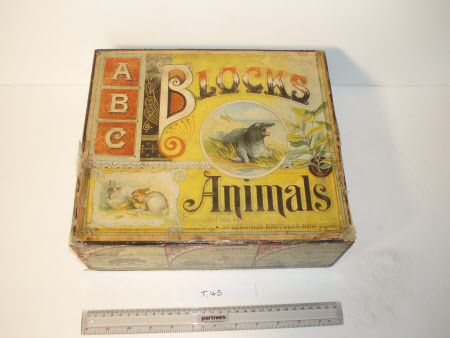 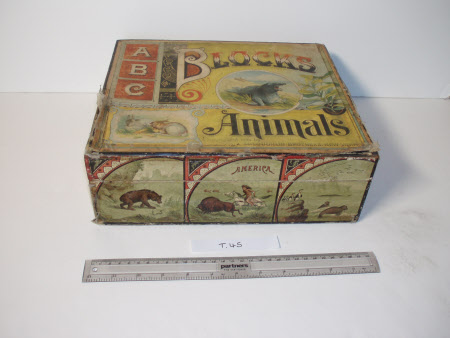 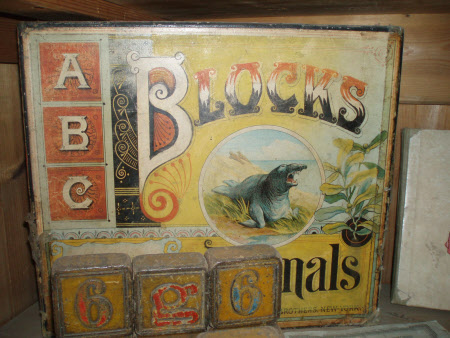 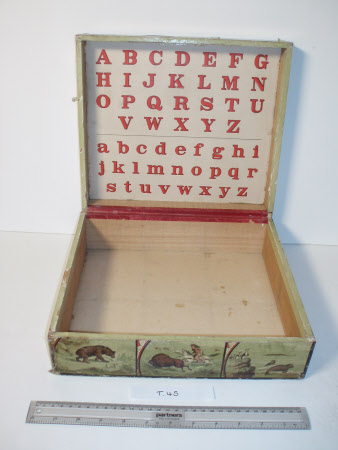 A set of wooden alphabet blocks in their original wooden box. Six large wooden blocks with paper coloured illustrations pasted onto them. The blocks depict letters of the alphabet in red and black ink. The first four blocks, covering A to P have four letters per block, each letter in one quarter. The last two blocks, covering Q to Z have five letters per block, the middle letter, S and X are inside a diamond. All the letters have a red border around the edge. The bottom of each block is the same as the top. However the bottoms of the first two blocks are mixed up. The other four sides of the blocks depict colour illustrations of animals in appropriate settings. The names of the animals are printed below in black ink. Again, the animals appear to be mixed up and not always the same as the letters at the top. The animals are as follows; A to D - Vlacke Vlacke, Wolverine, X. Yak and Zebu. E to H - Ass, Bear, Camel and Deer. I to L - Ibex, Jaguar, Kangaroo and Lion. M to P - Monkey, Nylghau, Opossum and Peccary. Q to U - Quaggra, Rhinoceros, Sea-Horse, Tiger. U. V to Z - Elephant, Fox, Giraffe and Hippopotamus. The box is decorated with colour paper illustrations. On the hinged lid are two rabbits eating carrots and a seal or sea lion showing its teeth. The lid reads 'ABC Blocks, Animals, Copyrighted 1885 by McLoughlin Brothers, New York'. The front side shows three separate scenes from America: a brown bear and snake; a Red Indian hunting bison and two walruses, penguins and a whale. The right-hand side shows three separate scenes from Europe: a cow and its calf; a huntsman, dog and cat; and a wild boar and deer. The back of the box shows three separate scenes from Africa: a lion mauling a giraffe; a rhinoceros confronting a crocodile, and a huntsman with a snake. The left hand side shows three scenes from Asia depicting an elephant; a tiger and a humped cow. The paper covering the lid is lifting and is covered with Sellotape which is also lifting. Total number of items is 7.