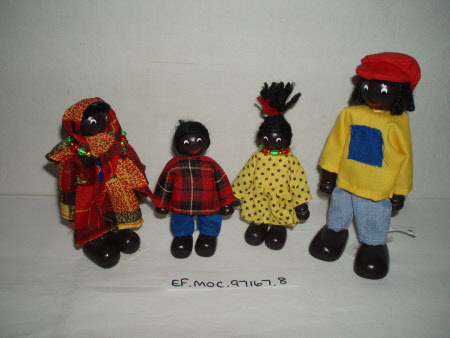 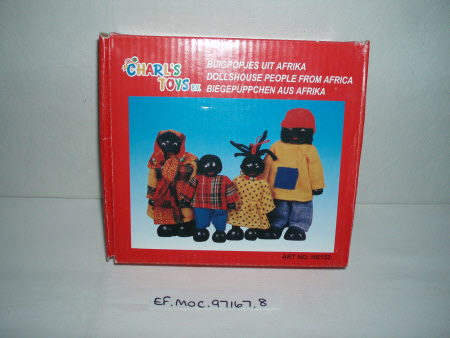 A set of dolls for a doll's house (2007), representing an African family, with their original box (box in storage). There is a mother, father, girl and boy. Each is made mainly from wood with a plain piece for the torso and shaped/turned pieces painted dark brown for the head, forearms and hands, lower legs and (very large) feet. The upper arms and legs are made from stiffened, thick, white cotton or nylon cord which is inserted into holes in the wooden pieces and glued in place. Their facial features are painted and their hair is made from black wool. The father's hair is chin-length with a short fringe. The mother's has only a fringe visible under her headscarf. Some of the girl's hair is wound round her head, the rest is tied up on top of her head with a red wool tie. The boy's hair is wound round his head. Each is dressed in polycotton fabric. The father wears 'denim' trousers, a yellow, long-sleeved tunic with a blue square on the front and a red peaked cap. The mother wears a red, yellow and black tartan-patterned, long-sleeved dress with a gathered skirt and matching large headscarf. The dress has two large, blue, felt 'buttons' glued to the bodice. She also has a necklace made from red, green and yellow metallic-coloured beads. The girl wears a yellow, long-sleeved dress which has a gathered skirt. The dress has an all-over pattern of tiny dark blue stars. She also wears a necklace which is a shorter version of her mother's. The boy wears dark blue trousers and a red, black and yellow tartan-patterned, long-sleeved tunic. The box is made from a single piece of colour-printed cardboard, folded. This has a mainly red background and has a large photograph of the dolls on the lid. Above this is the logo 'Charl's Toys B.V.' in white, blue, yellow, red and green with 'Dollhouse People from Africa' in English, Dutch and German. The writing is repeated on two of the sides. On the other side, printed mainly in black, is safety information (also in three languages), manufacturer's details and recycling information. Total number of items is 5.