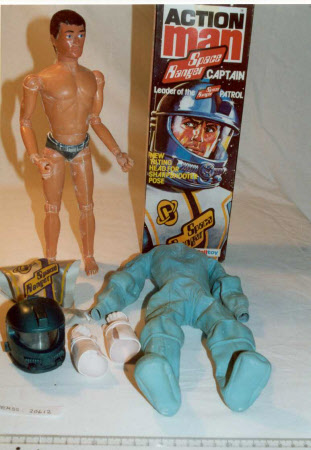 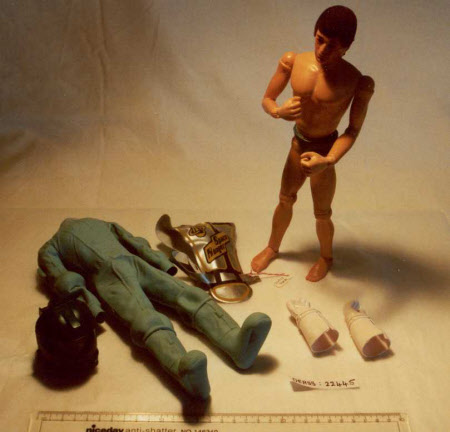 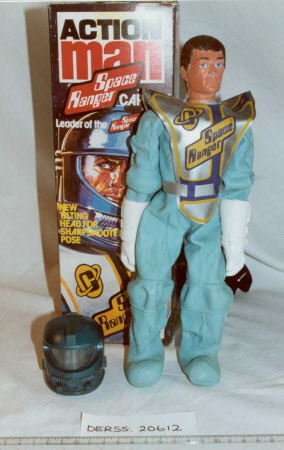 A Space Ranger Captain Action Man doll in its original black, red and yellow box (circa 1979). The box has coloured illustrations on all sides. The front has the title 'ACTION man / Space Ranger CAPTAIN / Leader of the Space Ranger PATROL' above a drawing of a close-up of a man in a space suit. The back has a picture of a space man in action. The sides have information about other Space Ranger characters and new improvements made to the dolls. On one end it shows that it was the Toy of the Decade, 1970-1980. The flesh coloured plastic doll has moulded features, blue plastic inset eyes (which can be moved by a lever) and painted eyebrows and lips. The artificial dark brown hair is cut very short. The doll is jointed at the neck, shoulders, waist, hips, knees, ankles, elbows and wrists and the fingers can be moved. The hips are cast in blue plastic to form a pair of trunks. He was dressed in a pale-blue, moulded loose-fitted rubber space suit. A silver coloured tabard secured with a belt, white soft plastic gautlets and a green, hard plastic helmet. The helmet has a clear visor and can be opened at the back. The tabard has a blue and yellow design printed on it. All the clothes have been removed and contain some kind of white powder to stop them sticking. The rubber suit is beginning to stick to itself and showing slight signs of decay. There are 2 leaflets in the box. One, printed in black and white, explains some of the features of the doll and what it can do. The other, printed in red, black and white, explains about the Action Man Star Awards and the gifts that are available. Total number of items is 9.

Donated to the Museum of Childhood by Mr S. Feber in January 1984.