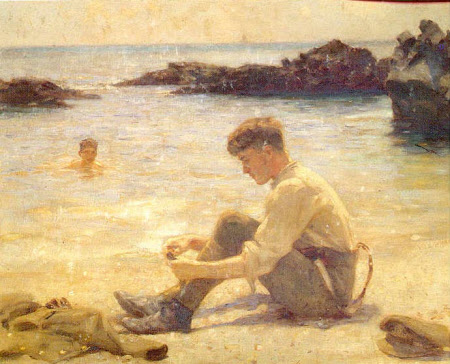 Oil painting on canvas, A Cadet (possibly T. E. Lawrence) at Newporth Beach, near Falmouth by Henry Scott Augustus Tuke (York 1858 - Falmouth 1929), signed H. S. Tuke and inscribed (posthumously) 1930. A possible sketch for his well-known 'Morning Splendour, 1921', other studies of which are in the Tuke Collection, Royal Cornwall Polytecnic Society. The figure seated on the beach is a soldier, in khaki, undoing his bootlaces and a companion is already swimming in the sea. The soldier's cap and jacket are on the sand. The face of the soldier, seen in profile, appears to have been altered to that of T. E. Lawrence. It is speculatively thought to represent Lawrence's fantasy of having run away from home to join the Royal Garrison Artillery in 1905. It is thought to have been originally painted in 1921 and Lawrence's face added in June 1922.

Recto: bottom right: H.S. TUKE 1922 (no longer legible as such as possibly tampered by artist) (signed and dated)