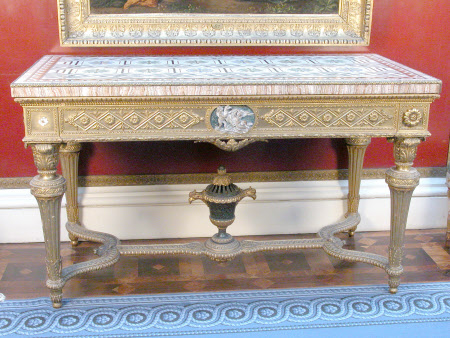 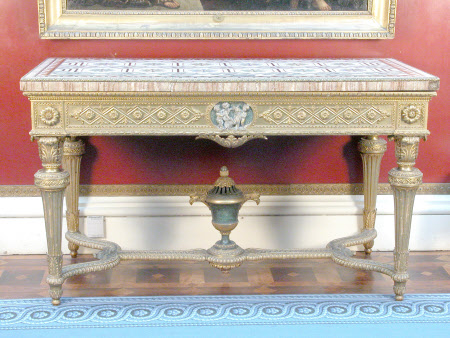 The finely detailed carving of this elegant console is characteristic of the circle of carvers and cabinet makers in Turin patronized by the Royal family. The most celebrated of these was Giuseppe Maria Bonzanigo (1745 - 1820), who worked for the court from 1773, however, other skilled craftsmen such as Francesco Tanadei, Giuseppe Marchino, Francesco Bolgie and Bartolomeo Manghetti, working around Bonzanigo, were also commissioned to provide work for Stupinigi, Moncalieri, Venaria, Rivoli and most of all for the Palazzo Reale in the centre of Turin. Bartolomeo Manghetti is known to have been an exceptional carver, originating from the Foresto municipality of Lombardy before moving to Turin, and was awarded maestro minusière from the Universita dei Minusièri on the 6th of July, 1786. Guiseppe Maria Bonzanigo (1745 - 1820) was born in Asti in 1745 and had settled in Turin by 1773. Over the next twenty years, he supplied a considerable quantity of furniture for the Royal Palaces, including chests of drawers, screens, cupboards, doors and door cases, all with delicate carving of flowers, musical instruments and trophies. In 1787, Vittorio Amadeo III appointed him official woodcarver to the Crown with a salary of 200 lire per annum, increased to 300 lire in 1792. The invasion of Piedmont by the French in 1796 deprived Bonzanigo of further royal commissions. He employed a large studio of assistants, and so these tables are attributed to his 'circle'. In 1803, he issued proposals for establishing a gallery and workshop 'to perfect the art of carving in wood and ivory'. It is thought that he resumed carving for the King of Sardinia after the Restoration, and worked until his death in 1820.

Believed to be 3rd Lord Berwick collection: William Noel-Hill, 3rd Baron Berwick (1773 - 1842). Listed in the Inventory taken at Attingham Park in 1913 (p. 59). Thence by descent, bequeathed to the National Trust with the estate, house and partial contents of Attingham by Thomas Henry Noel-Hill, 8th Baron Berwick (1877-1947) and transferred to the National Trust on 15th May 1953.